WHAT A WICKED ACT- OFFICERS STOOD BY AND WATCHED TEENS DROWN 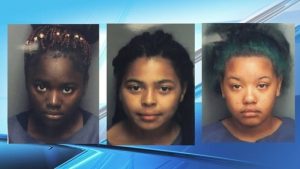 Last month in St. Petersburg, Fl, a Pinellas County Sheriff praised his deputies for ripping off their gun belts while trying to save the lives of three teenage girls from drowning after they accidentally drove a vehicle into a pond during pursuit.

The story goes, a friend asked Damien Marriott,35, to drive the teenage girls to Child’s Park that Wednesday night. When Marriott stopped at Walmart to buy a tv, the three girls took off in his 1990 Honda Accord. Hours later, deputies caught the Honda running a red light with the headlights turned off, as deputies chased the girls, they entered the back of a cemetery, which is where they accidentally drove into a pond.

Here is where things take a turn…

The next morning during a press conference, Sheriff Bob Gualtieri, applauded his deputies for coming out of their gun belts, running into the muddy water trying to save the dying teen’s lives, but newly released dash cam footage shows otherwise…

The video shows the deputies exiting their vehicles, standing on the shore, proceeding to listen and comment on hearing the teenager’s screams, but doing nothing else.

There was no running in the pond in attempts to rescue the girls, just commentary while the car submerged into the swamp. In the video, one officer can be heard saying, “I hear them yelling, I think!”

During the two hour wait for a tow truck, the deputies still took no action. Once the screams came to a complete halt, one officer responded, “They are done. They are 6-7 dude.”

Most likely, the officers filed false reports claiming to have tried to save the girls with no avail, for which no criminal charges for falsifying police documents or obstruction have been brought about.

Once finally pulled out of the swamp, the Honda Accord contained the deceased bodies of Dominique Battle,16, Ashaunti Butler,15, and Laniya Miller, also 15 years old. In an interview with ABC Action News, Laniya’s mother, Natasha Winkler, exclaims, “My daughter was not perfect,” fighting through tears, “What 15-year-old is?”