Former South African President Nelson Mandela helped usher in a era of peace and reconciliation in his country but he set off a firestorm in Miami that many have still not forgotten.

Mandela, who died Thursday at age 95, made a controversial visit to Miami not long after his release from 27 years in prison. Before his arrival, Mandela upset some in Miami by expressing solidarity with Fidel Castro, Libyan dictator Moammar Gadhafi and the Palestine Liberation Organization’s chief Yasser Arafat in an interview on ABC with Ted Koppel.

His comments caused an official welcome planned for him to be rescinded by the time he arrived to address 6,000 people at the June 24, 19990 international convention of the American Federation of State, County and Municipal Employees at the Miami Beach Convention Center.

Five local Cuban-American mayors signed a letter criticizing Mandela’s comments as “beyond reasonable comprehension.” Among those in opposition at the time was former Miami City Commissioner Victor De Yurre who remembers the incident as something that touched a sensitive nerve among local Cuban Americans.

“It was an unfortunate situation because here you have someone that stood for so many positive things,” De Yurre said. “You see the struggle he went through and that is something Cuban-Americans could relate to.”

In response to the Cuban-American reaction, a small group of the city’s black leaders began an economic boycott of Miami’s tourism industry, dubbed the “Quiet Riot.”

Boycott organizers demanded formal apologies from local leaders for not welcoming Mandela. Organizers also asked for more representation in the tourism industry and single-member voting districts for Miami, the county and the School Board in an effort to have equitable elections.

Miami attorney and law professor H.T. Smith, who organized the protest, remembers Mandela’s visit as the “best of times and the worst of times.”

Since 1986, he had led the coalition for a free South Africa until Mandela’s release in 1990. The visit was a way for Mandela to honor the people of Miami with his presence, Smith said.

“For Cuban-American leaders to expect Nelson Mandela to denounce someone who fought against apartheid in its darkest times was unrealistic,” Smith said. “This was one time when Cuba was on the right side of history” with its opposition to apartheid.

A sour note to an otherwise historic visit, Smith still remembers when he finally met the South African leader at a Miami ASME meeting on June 28, 1990.

“I remember when he embraced me, I felt like I had been kissed by history,” Smith said. “He whispered in my ear, he said, ‘Thank you for standing with us on the darkest days of our struggle against the apartheid. Thank you on behalf of the people of South Africa, my brother.’”

The boycott was called off in 1993 with an agreement between business and civic leaders answering the demands of protesters. The agreement was considered by many leaders to be a milestone in Miami’s racially divided communities and a sign of changing times. 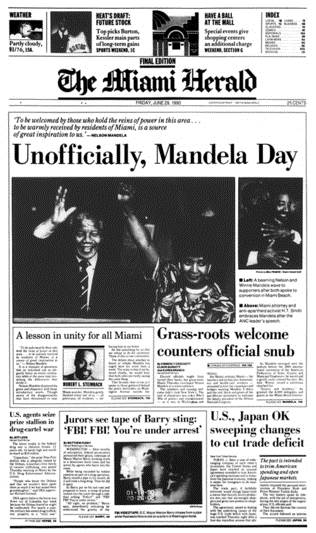 Smith said Mandela’s visit “galvanized the black community like it has never been galvanized before or after.”

He added that Mandela “wowed us with his courage and elevated us with his wisdom. He’ll be in the hearts of freedom-loving people for as long as there’s a planet earth.”