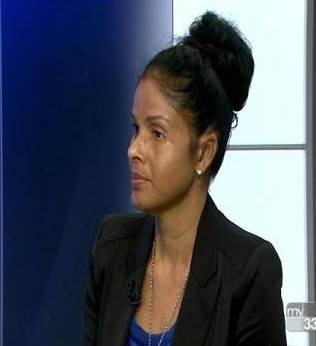 MIAMI (CBS4) – This summer will mark four years since a triple murder in Miramar left two teenagers and one of their mother’s dead in a random act of violence. The survivor of the shooting, Camille Hamilton, lost a daughter in the attack and has suffered significant medical problems after being shot in the head.

CBS 4 News sat down with Hamilton recently. She described physical and emotional pain that is never-ending and a persistent desire to keep her daughter, Nekitta’s, memory alive.

Hamilton lost so much in August 2009.

Her daughter, her best friend Faith Bisasor and Faith’s son Davion Bishop were shot and killed at Faith’s Miramar home during a robbery. Camille and her daughter went to Faith’s home after shopping for a Sweet 16 dress for Nekitta and planned to spend some time together.

Hamilton said a man she’d never seen before came into the house and started shooting. Camille was shot in the head and didn’t regain consciousness for hours. Camille was shot in the head and lost the hearing in her left ear. She also lost a portion of the vision in her left eye and says she’s undergone at least 6 surgeries. She says her doctor believes she needs another.

“He could help me by doing the bone enhancement and pushing the eye out because it’s resting on some muscles and tissues inside,” Camille said.

But Camille told CBS 4 News her insurance company considers the operation plastic surgery and she says the operation is too expensive for her to pay for out of pocket. She says the operation would relieve pain and allow her eye to tear normally. For now, she has to use expensive drops to keep her eye moist and for a woman who writes to her daughter in a journal every day, the tears flow often.

“Hi my baby, my angel, Nikki,” Camille read from a journal entry to her daughter. The entries cover all aspects of Camille’s day — her work, her feelings, her pain.

We met Camille at the Victim’s Memorial in Davie where Nikki’s name is etched in granite. She carries a book of her daughter’s photos wherever she goes.

“She may not be here with me in flesh but she’s with me in spirit,” Camille said. “She’s my angel and she’d want the best for mommy.”

Camille is a nurse and is alone in the U.S. and says she spends a lot of time thinking about the man accused of causing her so much pain.

She hopes to someday ask Kevin Pratt a question and tell him something.

“I just want to ask him why is so heartless,” Camille said. “All I need justice.”

Camille’s doctor tells CBS 4 News he is trying to get Camille the operation she needs at a South Florida hospital for a reduced cost. If anyone would like to donate to help Camille pay for the operation, visit Neighbors4Neighbors.org and click on the Family Fund.

No trial date for Pratt has been set. Police were able to track him down by using DNA found on duct tape inside the home. According to investigators, Pratt denied any involvement in the murders. He is being held in the Broward County Jail.