WOMAN’S BABY STOLEN FROM HER ARMS IN ST MARY 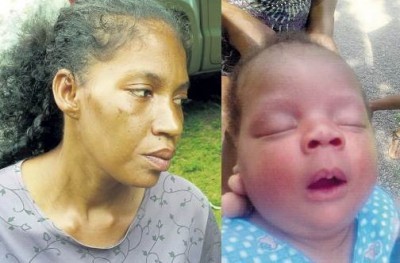 ANNMARIE Karram would cradle her newborn baby, Akeem, tenderly stroke his plump face, and speak to him in a loving, soft tone as she promises to keep him safe.
“You are the youngest baby I have and I don’t want anything to happen to you,” the 36-year-old mother of five children would tell her son.
“Just like how the others survive, you will survive too.” Often, she would rock Akeem to sleep, cradling him in her bosom long after he had closed his eyes, and stare at his face, a picture of tranquility.
At times her mother would make a fuss, telling her not to allow the baby to sleep in her arms because “it will spoil him”. But it was her baby to hold and to keep safe.
However, just seven weeks after his birth, on October 8 at home in Content/Retreat, St Mary, Akeem would be snatched from the loving arms of his mother on Monday, November 24, by two women in the neighbouring parish of St Ann.
The incident has devastated Karram, who now feels that she has failed in her duty to protect her newborn from the savagery of the world, and left the extended family and police puzzled.
“Anywhere you have him, I want you to carry him back,” Karram pleaded to her baby’s abductors during an interview with the Jamaica Observer on the weekend.
“I want you to carry him back safely so I can hold him like before, and for his brother and sister to be with him.
The whole family want him as before,” she said on the brink of tears. “I have a hope that he will be returned. I love that baby. That’s my last baby.
The family has a hope of getting back the baby. It’s my last, last baby,” she lamented. Baby Akeem wasn’t registered after birth, and his first visit to any medical facility — St Ann’s Bay Hospital — came after Karram took ill with symptoms of the chikungunya virus recently.
On the day the incident occurred, a shopkeeper who is also named Annmarie and who lives close by, was given a number by a taximan in the area to call.
The shopkeeper told the Observer that when she called the number, a woman on the other end of the line told her that the date was going to pass for her to bring her baby to the clinic.
She said she had no baby, but that she knew an Annmarie with a young baby and would pass on the number to her.
The shopkeeper did as promised, and soon Karram was dialling the number. The person wanted to know if Karram was going to take the baby to St Ann’s Bay.
But Karram said she told the woman that she had no need to take Akeem to the hospital. The woman, Karram said, insisted that she take the baby to Ocho Rios to “sign some papers”. Karram, who could be described as trusting, relented and agreed to meet the woman in Drax Hall.
There, she said she met an “Indianlooking” woman who paid her taxi fare and they entered a property with a security post.
Karram thought aloud that there was no house in sight and that the place was quiet, but the woman said that it was quiet because a lot of doctors lived in the area.
Karram said lots of signs advertising lands for sale were on the property. Soon, she saw a “fat, big-busted lady of dark complexion and reddish hair” sitting alone.
Karram said the woman asked the Indian-looking lady for a phone call and soon all three were sitting together with Karram and her baby in the middle.
The women never identified themselves by name, Karram told the Observer. The fat lady took the baby and played with him before giving him back, and Karram started breastfeeding him.
To her surprise, Karram said, the fat lady stabbed her in the neck with what appeared to be a hypodermic needle and menaced her with it.
“You don’t see she stick me with the needle?” Karram said to the other woman.
“Give me the baby,” the Indian lady said. “No! Mi not giving you mi baby!” Annmarie shouted. She was, however, overpowered by the Indian-looking woman who tore Akeem from her grip and ran off into the bushes, leaving her weeping and screaming for help. The fat one also left without saying anything further.
Karram said she rushed to the “security lady” at the entrance to the premises and told her what had occurred and then went to the st Ann’s Bay Police Station to report the matter. She said the fat lady is around medium height and was wearing a red blouse and jeans-looking pants.
Her hair appeared to be processed. She wore a pair of slippers and had two bags: one red, the other either brown or cream in colour.
The Indian-looking lady is of “darkish” complexion, has a straight face and a mole on the left side of her mouth. She wore a black blouse, dark looking pants and a pair of “old shoes” .
She’s of medium build. The baby, Karram said, has a hole on his left ear, and a cluster of birthmarks on the lower back, close to his buttocks. “It hurts. I don’t know how I’m going to live it out.
I had no idea that they would do this to me,” Karram told the Observer, tears welling in her eyes.
“Even this morning I was crying and praying about it. Anytime I go to my bed I feel that he’s beside me, and when I lay down I just vision that I have him,” she said.
“I don’t think they will hurt him or disadvantage him, but I want him back,” she said.