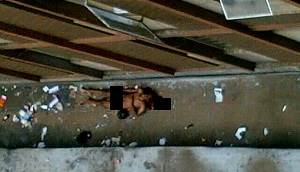 A 16-year-old Zimbabwean boy plummeted to his death from a sixth-floor window in Johannesburg after he was allegedly found undressed in bed with another man’s wife.

Now police are investigating whether Nyasha Johwa jumped or was pushed out of a window of a nine-floor building in Claim Street, Hillbrow, on Tuesday. It is believed that in the early hours of the morning, the teen was allegedly let into the flat by his lover.

“It was around 9.30 (in the morning). I was bathing, and suddenly I heard a woman screaming and thudding noises,” said a visibly shaken Juliet Ndebele, who shared a flat with the woman.

She also heard a man’s voice. It was the woman’s husband. Ndebele had seen him at the flat on a few occasions, so she recognised his voice. The couple, said Ndebele, were parents to a 13-year-old boy.

She heard him shouting “S’febe uyajola! (wh**e, you’re cheating on me)”.

“That’s when I dressed and came out quickly. I saw her leaning out the window, screaming ‘He fell! He’s dead!’.”

Ndebele said the distraught woman then threatened to throw herself out of the window as well.

“I told her not to do it,” she said, “then I looked out the window to see what she was talking about and I saw him laying there undressed.”

Ndebele said she had not seen the boy in the flat prior to the tragedy and only saw him when he was lying face-up on the landing at The Lloyd.

Pulling aside the red curtain, Ndebele shook her head at the gruesome recollection. When The Star spoke to Ndebele a few hours after the incident, it was clear that the memory still haunted her. “I can’t eat and I feel weak. My heart was broken because he’s so young.”

Getrude Sibanda, who owns the flat, said the woman had been living there since the beginning of the month.

“She said she just needed to stay here for a month to get her affairs in order and would move out at the end of November.”

“His (Johwa’s) brother was here to fetch the boy’s clothes but could only find his denim shorts and sneakers.”

The teenager’s brother, John, 24, said his brother had stopped going to school last year and was working at a club in Sunninghill. He was not sure what he did there.

“I have managed to contact our family in Zimbabwe to tell them but I don’t know how they’re feeling,” he said.

“I just have no strength.”

The police have arrested the husband, who can’t be named until he appears in court.

He is facing charges of assault with intent to cause grievous bodily harm. It is believed that during Tuesday’s fight, he beat up his wife.

“We have opened an inquest docket because we don’t know if it’s murder or whether he jumped,” said police spokeswoman Constable Carol Mulamu. On Tuesday night, the husband was being held at Hillbrow police station. The woman is not in custody.