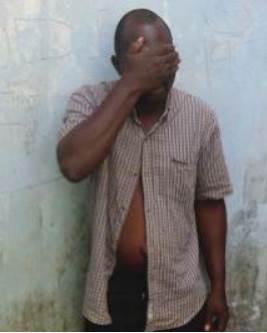 Forty five-year-old Taiwo Bakare, probably had nursed his sinister idea for a while. But on Monday, November 10, 2013, he decided to put his plan into action.

When the mother of 10-year-old Blessing (not real name) had left the shop where she sells petty goods on Unity Street, Egan area of Igando, Lagos, Bakare, who is a landlord on the street, walked up to the shop where the girl tended to her mother’s wares. Under the pretext of buying something, he took the girl to his house – a small bungalow at No 45 at the end of the long street – and defiled her.

No one saw anything. No one heard a noise that evening on the street as Bakare allegedly carried out his heinous crime. But as soon as Blessing’s mother returned to the shop, she knew something was amiss because her daughter was walking awkwardly.

“I asked my daughter what happened to her. I pleaded with her to tell me. She then told me that he (Bakare) came to buy something at the shop when I was not around and took her home and slept with her,” the distraught woman told the police.

Blessing reportedly told her mother and the police that she did not know what happened after Bakare bought what he came for at the shop. She said what she knew next was that he was on top of her in his house.

The girl’s mother did not waste time in reporting to the Igando Police Division, where the Divisional Police Officer, Mr. Ben Osuji, drafted some of his men to apprehend the suspect.

“As soon as the suspect saw policemen, he fled and ran into a canal in the area. That was where we arrested him,” a police source told Saturday PUNCH.

During interrogation at the station, Bakare blamed the usual suspect – the devil – for his crime.

According to a statement he made at the police station, he said he did not know what came over him when he took the little child home and slept with her.

Bakare, a well built-man with a slight ‘pot belly’, could not deny the crime but the life of the small girl seemed to have been changed forever.

The police did not reveal the address of the victim’s family on the street in order to protect her.

When our correspondent visited Unity Street, it was noticeably a very quiet neighbourhood in the interior part of Igando, Lagos.

The residents revealed that Bakare is the Secretary of the landlord association of the street.

The suspect’s house, a barely finished two bedroom bungalow, where he allegedly carried out his crime, is solely inhabited by him, a neighbour said.

“There was no sign that he could do something like that. In fact, I have never thought that he could be promiscuous let alone raping a small girl. We were shocked when the police came for him,” the young lady said.

A landlord two houses away from Bakare’s, gave a similar opinion of the suspect.

“He lives alone but could we have appointed him secretary of the association if we knew he was a dangerous man? Nobody has alleged rape here before unless they refused to report it. Let him go and defend himself in the court,” he said.

The police at Igando said the 45-year-old father of four was being held on charge of defilement as they have also taken the victim for medical examination in an undisclosed hospital.

Saturday PUNCH was told he would soon be charged to court.

However, Child Rights Activist, Mrs. Esther Ogwu, said it was simply “traumatic” to hear of such allegation of someone of Bakare’s age.

She laid some of the blame of the crime on the doorstep of the victim’s parents.

Ogwu said, “My opinion is that many parents are becoming very careless about the way they leave their children to the mercy of strangers on the streets.

“We need to remember that children are not like adults. They can easily be deceived by guile. If a child for example goes hungry, no one can say what a stranger with a mere N50 can do to such a child.

“Many things cause a child to be sexually exploited. It is really annoying because that girl has simply been traumatised.”

She advised that the girl should be made to go through counselling, adding that the parents needed to relocate from the area in order to prevent stigmatisation by those who may hear about the case.