Meet child prostitutes who sleep in the cemetery because they think it will keep them safe from evil. Following the end of a 14-year-old civil war that ended 10 years ago, some Liberians are still suffering from the aftermath of their ordeal. 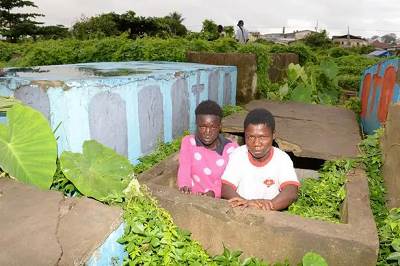 The young people who are selling their bodies in order to make ends meet have made the Palm Grove Cemetery in Monrovia, their residence as they really have nowhere else to go. 16-year-old Princess Chea and her friend, 17-year-old Joshua Williams inside a grave Speaking to reporters from Daily Mirror, 16-year-old Princess Chea had this to say: “I’ve been sleeping here in the graveyard for five years.
There is no other option, my parents both died after the civil war. There was nobody to protect or look after me. It is safe in here, in the tombs, where nobody dare come to hurt us.” PAY Weeping profusely, Princess went on to confirm she started prostitution when she was just 10 years old. Here’s what she said below: “I’ve been working as a prostitute for six years now.

I am not happy at all, but I have nobody to turn to. Every day I sleep with up to 10 older men. I have been lucky never to have got pregnant, and I am not afraid of AIDS because hopefully God will protect me. I smoke cocaine to take away the pain while praying every single day that I can one day leave my grave and perhaps even go to school.”

Princess Chea and her friend, Joshua Williams sitting inside a grave One of Princess’s friends, 12-year-old Daniel Johnson, says he’s lucky to even have a place among skeletons, as his family was wiped out by Ebola last year. Here’s what he said: “I feel safe here with the spirits to watch over me. We have nobody else, and nothing else.