A Mapo customary court in Ibadan, Oyo State, has dissolved an 83-day-old marriage between Pa Owolabi Alowonle and his wife, Idia, for deception.

The News Agency of Nigeria (NAN) reported that Alowonle, 70, a surveyor was a widower before he married Idia, who was a widow.

President of the court, Mr Henric Agbaje, held that both Alowonle and Idia based their rush into marriage on infatuation and the urge to satisfy their selfish ambitions.

“I don’t exactly understand why two elderly persons who are already widow and widower should carelessly rush into a marriage without proper knowledge of one another. 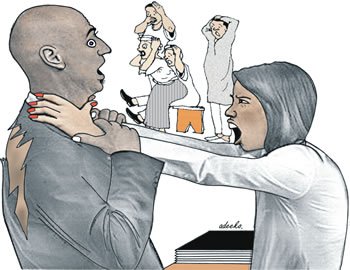 “Well, I only wish both of you good as you have both accepted dissolution of the union.

“Therefore, in the interest of peaceful coexistence, the 83-day-old union between Alowonle and Idia has ceased to be henceforth,” he said.

He, however, directed Alowonle to provide a cash of N12,000 for Idia’s accommodation and another N2,000 for the movement of her belongings within seven days.

Earlier, in his petition, Alowonle told the court that Idia was causing disharmony in his house as well as being a threat to his life.

“My lord, ever since Idia got to my home on May 18 this year, she has been doing everything possible to put an end to my life by not giving me rest of mind.

“She has been causing serious disharmony among my tenants who were peaceful before she married me.

“She and her daughter from time to time fight and gossip around the house giving unfounded information about one tenant to the other.

“As if that is not enough, Idia incited her daughter against me to abuse and break the long existing regulations I imposed on the house for peaceful coexistence of the tenants and my family.

“I barred any form of singing of religious songs which I know could cause problems among Muslim and Christian tenants.

“However, the daughter she brought from her late husband deliberately started singing in the house.

“In fact, Idia and her daughter have no respect for me,” Alowonle explained.

Idia, who did not deny any of the allegations, welcomed the divorce suit.

“It will be a big relief for me to exit his house, the house of trouble.

“My lord, when he met me as a widow, Alowonle promised to take good care of me, assuring that he had no wife since he lost his last wife.

“However, just seven days after I moved into his home as a wife, he brought in another wife and started treating me like dustbin.

“It is a thing of joy for me to be free again from his unfaithfulness,” Idia said.