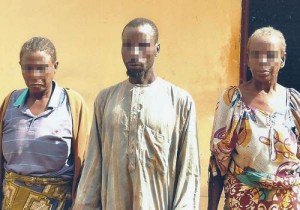 The Police in Niger State have apprehended an unusual cult group which specialises in eating roasted human flesh among its members.
The police informed that the incident occurred on August 21, 2014 .
Crime & Security gathered that prior to their arrest, a nine-year-old boy, Umar, was handed over by his father, Mohammed (surname withheld) to his mother, Fatima, to assist in looking after the little boy pending his arrival from a short journey within the state.
It was further learnt that no sooner had Mohammed departed for the journey that his mother, Fatima, who happens to be the first suspect, gave the boy to the second suspect, Tetengi with an understanding to slaughter the boy and share his body among the three of them which included Aminatu.
Further checks revealed that the victim was allegedly slaughtered by Tetengi, who roasted the boy and shared his body with Fatima and Aminatu as planned.
When the father of the victim returned from his short trip outside the village, he was said to have asked his mother for his son whom he kept with her, and the first suspect allegedly informed her son that the little boy disappeared shortly after Mohammed left her house and that she had not set her eyes on the little boy since then.
A police source at the Homicide unit of the Criminal Investigation Department, Niger State Police Command headquarters, Minna, revealed that the father of the victim invited an Islamic scholar to unravel the mysterious disappearance of the boy.
“Apparently unconvinced by his mother’s argument, the father of the victim, Mohammed, was said to have invited an Islamic cleric in the neighbourhood to come and assist him unravel the mysterious disappearance of his son, Umar, from his mother’s custody.”
The source noted that the outcome of the cleric’s prayer revealed that the first suspect, Fatima, was allegedly not being sincere about her claims with regards to the mysterious disappearance of her grandson, Umar.
Thereafter the case was taken to the Etsu Nupe, Alhaji (Dr) Yahaya Abubakar, paramount ruler of Nupeland and Chairman, Niger State Council of Traditional Rulers, with the view to know the next step to be taken by the aggrieved father over the disappearance of his son.
The monarch was said to have directed the man and his family members to report the matter to the authorities of the state Police Command in order to unravel the mystery behind the disappearance of the nine-year-old boy.
The suspects allegedly confessed to the crime during interrogation by the homicide detectives attached to the department, as one of the suspects was said to have informed the police, upon interrogation, that human flesh was tastier than those of animals.
This was based on the suspect’s alleged experience while eating the roasted body of the nine-year-old boy.
Click Here to Comment on this Article
Tagged : Crime News, Niger State, Trending, Cultists In Minna Kill Eat 9-Year Old Boy