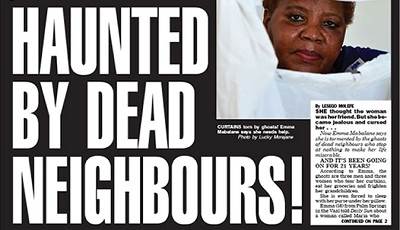 Emma Mabalane (58) from Palm Springs in the Vaal, SA, says for the past 21 years she has been tormented by the ghosts of dead neighbours who stop at nothing to make her life miserable.

According to Emma, the ghosts are three men and three women who tear her curtains, eat her groceries and frighten her grandchildren.

She is even forced to sleep with her purse under her pillow.

Emma told Daily Sun about a woman called Maria who befriended her when to moved into her house in 1992.

“At first Maria welcomed me with open arms and pretended to love me. But one night something weird happened,” said Emma.

“We had been chilling at Maria’s house and I had been asleep for a couple of hours when something woke me up.

“There stood Maria, her face painted white and wearing clothes of all sorts of colours. She looked scary. I asked what she wanted and she just looked at me as if she was crazy.”

The ghosts apparently started coming after that, and she says she can’t get rid of them.

“I was not close to the ghosts when they were alive,” said Maria. “But they were neighbours. They knew me because I had been to their funerals. They told me they were sent by Maria to torment me.”

She believes Maria and the ghosts are jealous of her house because she renovated it and is a single parent. Emma said it got worse last year when she and Maria had a fist-fight.

“She demanded to know why I was no longer buying food for her people.” Since then Maria appears to have vanished.

“What hurts me now is that the ghosts have attacked my daughter. She is no longer the person she used to be. She doesn’t work anymore.”

Emma said: “I believe in God and that he will send me someone who will help me.”

“I cannot tell you how many thousands of rands I have spent on sangomas, but the ghosts are stronger than the muthi I have been given,” said Emma.

“But I will be strong and keep the faith that help is on its way. I have no other choice.”

He said: “What they did to her is take the soil from the deceased’s graves, mix it with muthi and throw it all over her yard.

“They will not stop until who ever heals her goes and takes the same soil and mixes it with muthi in order to reverse the curse.”