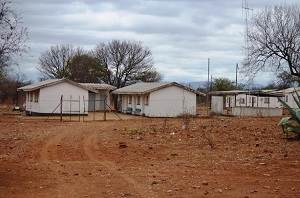 Terror-stricken clinic staff have abandoned a clinic in Irisvale resettlement area of rural Umzingwane district after a series of paranormal incidents that have left locals confused on who to turn to for relief.

Irisvale Clinic is located 85 kilometres from Bulawayo off the main Gwanda highway in Matabeleland South province.

The clinic, situated a stone’s throw from Zuka Business Centre, under Chief Mabhena, caters for about five of the 13 wards in the constituency and has of late been imperilled by a resurgent spate of scary and traumatising happenings each night female nurses go to bed.

When reporters visited the affected area last week, the clinic was shut, with only one of the remaining nurses identified as Sibanda busy packing his belongings ready to leave.

Sibanda however preferred not to speak to the media citing bureaucracy.

“We are not allowed to say anything about anything here. You can contact the district nursing officer who has the authority to speak to the press. She might help you.”

It also emerged that one of the two senior nurses who were manning the clinic had left a week before complaining of abuse from the creatures of the underworld.

The unidentified female nurse who had reportedly stayed for two months at the clinic allegedly lost a three months old baby as a result.

Villagers in ward eight expressed concern over the presence of the creatures which have taken over the only nearest primary health care facility in the vicinity, leaving them with the task of having to walk not less than ten kilometres to either Mbalabala or Esigodini health care centres for medical attention.

Milton Khumalo, 40, a member of the Irisvale neighbourhood watch community said villagers have had this problem for a while and it was something that worries them.

“As you can see, the clinic has been closed for a week now and we do not even know until when. I do not have a first account of what is really happening but from all the stories I have heard it appears the goblins do exist,” Khumalo said.

He said he had spoken to both male and female nurses who left and their stories seemed to tally.

“Females complain of sexual abuse while they sleep and wake up with blood-stained genitalia the morning. They say they hardly sleep because of strange noises emanating from the houses. There is also a talk of a human hand that strangles them,” he said.

“Sometimes we hear the nurses wake up only to find themselves wearing undergarments from the opposite sex and many other paranormal incidents.”

Asked about the possible source of the problem, Khumalo said most locals attributed strange events to a contest over the location of the business centre which encompasses a school and the clinic.

“There has been a war over why these facilities were situated in ward eight. People in other surrounding villages had initially wanted these facilities to be constructed in their area. This is a belief widely held here,” he explained.

Khumalo’s sentiments were echoed by fellow villagers who vouched that the clinic was haunted by goblins who are wreaking havoc.

“The complaints by the nurses are genuine. I have personally experienced the torment. It is just unbearable no one can stay under those circumstances,” said an elderly woman who claimed to have been a maid to one of the affected nurses.

“I have lost my job now that my employer has gone. Besides, we are now saddled with lacking an accessible health facility. I suffer from high blood pressure, so it is more costly for me as I have to travel all the way to Mbalabala or Esigodini to get my medication,” she said.

It also emerged that the previous week when alarm bells rang, villagers met at the clinic and resolved to seek either traditional or divine intervention to the problem.

“We agreed that we hire Tsikamutandas to come and cleanse this area but I am surprised they have not shown up probably they are still beefing up their strength as these things are said to be powerful.

“A certain church has also been asked to come but we have not seen anyone so far,” said one villager.

William Busuman, Matabeleland South provincial medical director, confirmed the existence of the goblins when contacted by this paper.

“I have not received the latest report so far but the issue of goblins is true. Even last year, we had a similar situation at the same clinic with some employees complaining about these goblins,” Busumani said.

He said they have since engaged traditional leaders to exorcise the clinic of goblins.

“I feel the chief and the traditional leaders need to sit down and conduct a traditional ceremony. Maybe this may come to an end,” Busumani added.

Levison Tanyanyiwa, a local businessman, said only divine intervention could solve the problem.

“I have heard of women being the most affected as these goblins reportedly turn them into wives. This has affected not only the nurses but even the teachers too. I feel the community needs to unite and exorcise this in the name of Jesus,” Tanyanyiwa said.

A tour of the area revealed an unusually tense atmosphere with teachers from Irisvale Secondary School, less than 100 meters away from the clinic, shying away from the media.

Likewise, fear was conspicuous on the faces of the students as they could not open up on the widespread issue.

It became apparent that many people in the area, mostly government workers, were not at liberty to discuss the subject with strangers.