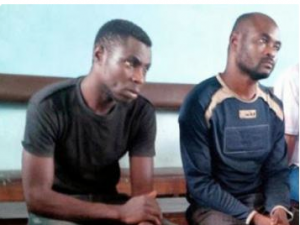 The Kwara State Police Command has arrested a herbalist, Akeem Adeniyi, for allegedly abducting his girlfriends, identified simply as Bose and Busayo, with a view to using them for money ritual.

It was gathered that Adeniyi connived with two other suspects ─ Biodun Yusuf and one Raphael, who is still on the run ─ to abduct the victims.

Punch Metro learnt that two of the suspects were apprehended after the residents of the Alla-Isin area of Kwara State heard somebody screaming for help in Alla Grammar School at about 11pm on March 11 and rushed to the scene.

It was said that the residents could not find the victim on getting to the scene, but saw a Sienna

Space Wagon bus believed to be the property of the people that attracted the residents.

Adeniyi reportedly told them that Busayo was her girlfriend and he was only trying to forcefully have sex with her when she screamed. He was said to have initially declined to reveal her whereabouts.

Police said Adeniyi and his friends were also responsible for the abduction of Bose, who was declared missing on March 19 by her father.

The herbalist, who claimed the second victim was also his girlfriend, reportedly led security operatives to their hideout, where Busayo and Bose were rescued alive.

Our correspondent learnt that the suspects were transferred from Oke-Onigbin Police Division to the Criminal Investigation and intelligence Department in Ilorin for proper investigation.

They were on Wednesday, arraigned before Mr. A.I. Babatunde of the Ilorin Magistrate’s Court for criminal conspiracy, kidnapping and homicide.