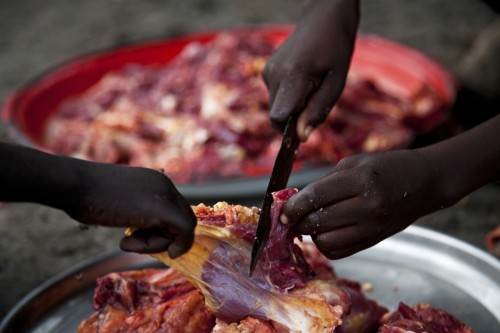 Nigeria – An anonymous tip-off recently led to a gruesome discovery of fresh human heads wrapped in cellophane at a hotel restaurant in Anambra, Nigeria.

11 people were arrested including the owner, six women and four men. AK-47 guns together with other weapons were also seized.

According to yourjewishnews.com, authorities had closed down the restaurant after they found that it had been selling dishes made with human flesh.

Police had also discovered that ‘roasted human head’ was on the menu.

A pastor who was surprised to learn that he had been served human meat was quoted in the OSun Defender as saying:

“I ate at the restaurant and the bill was very high. The workers told me that I ate human flesh. I was shocked. So I did not know it was human meat, that I ate at such expensive prices.”
Restaurant
– See more at: http://bulawayo24.com/index-id-news-sc-africa-byo-43115.html#sthash.8HOxeATN.dpuf