A mother of a 13-year-old girl that was raped and impregnated by her father has filed for a divorce before a Sharia court Magajin Gari, Kaduna, Kaduna State. 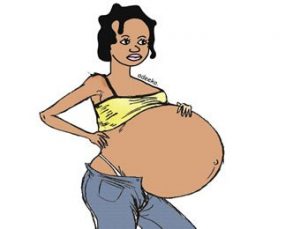 In a writ of summon submitted before the court, the mother, Maryam Manta alleged that her 40-year-old husband, Hafizu Isyaku raped his 13-year-old daughter, (names withheld) and got her pregnant when they were staying at Mararaba, a surburb of Abuja. She revealed that the shameful act forced her to abandon their home in Maraba, where she lives with her husband and relocated to Kaduna with their six children.

She told the court further, “When I returned from where I went to see my parents, as a mother and as a woman, I noticed my daughter was not behaving normal and at the same time sick.

“But I didn’t suspect anything because my husband do constantly gave her some concoctions to drink which he claimed was going to heal the daughter’s ailment.

“But when the ailment persisted and I noticed my daughter had missed her period, I questioned and threatened her to tell me if she had any affair with a man and she eventually opened up to me that her father had been making love to her.

“So, when I confronted Hafizu with the issue, he cried and confessed about joining a cult group which mounted pressure on him to get his daughter pregnant and also abort it as part of the sacrifice.

“I became confused and cried my life out and he promised to disssociate himself from the cult and I went together with him to the hospital where the pregnancy was aborted,” she told the court.

She said further that, she later found out that the father continued to have sexual affair with their daughter even after the abortion, confirming to have caught him redhanded in the act.

“I became heartbroken and absconded from his home, that is Maraba and returned to Kaduna with all my six children. It was when I arrived Kaduna that I reported the issue to the District Head of Kabala Doki, Danlami Bawa who invited my husband and I. After all discussions, I sought for divorce,” she said.