He accuses me of being adulterous, threatens to cast a spell on me —Wife

A woman, Christiana Alli has told Ile Tuntun Customary Court, Mapo, Ibadan, Oyo State, she’s no more interested in her 25-year-old marriage to her husband, Isiaka Alli, on the accounts that he’s troublesome and has constantly soiled her image.

Christiana thus prayed the court to terminate their relationship.

“My husband has made our home hot and inhabitable for me for over two years. We fight almost every day while he keeps malice with me on regular basis, “the plaintiff told the court. 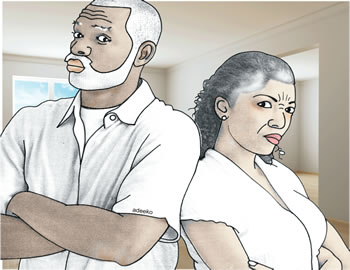 “I’m in charge of a church which took me some years and much effort to establish. He always felt displeased whenever I entertain visitors either male or female in the home. These are mostly people who come to me for help or prayers. Quite a number of them are my church members. His belief is that I’m sleeping with all these men.

“My lord, my husband goes to my church to embarrass me. He accuses me of being adulterous and sleeping with male members of the church thus denting my image. As a result, the number of members of my congregation is greatly reducing because they are gradually losing confidence in me, “Christiana said.

“I moved out of his house to mine when he almost succeeded in frustrating me but he moved in with me and started fighting me again. He went as far as threatening to cast a spell on me.

“I reported him to my father who advised me to seek divorce in court, “she concluded.

“I insist she’s an adulterer, “Isiaka stated before the court.

“We started experiencing crisis in our marriage in 2017 when I lost my sight. “She has since been denying me sex but would bring men into the house under the pretext that they came for prayers and sleep with them.

“I bought the land on which the house she claimed is hers was built. I bought it through her father and in our children’s name.

“She has documents of my property in her possession. She’s seeking divorce in order that she might take over my property.

“My lord, I didn’t soil her image or send her members away. Her members left because the landlord association of our area stopped her church from holding vigils. According to the association, the church was a threat to the peace and tranquility of the neighbourhood.”

Ruling after he had listened to the evidence of both parties, the court president, Chief Olasunkanmi Agbaje, stated that more evidence would be needed.

He, therefore, adjourned the case till July 17, and asked the couple to come to court with their children and parents