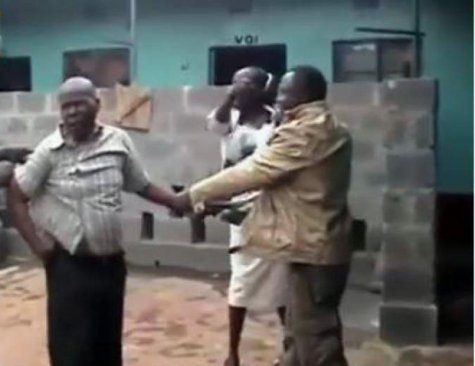 A 70-year-old man escaped death by a whisker after he was caught red handed in a lodging with another man’s wife in Kerugoya town. Joseph Kabuga was beaten senseless by a mob, which busted him in a lodging led by the fire-breathing husband, who, it is alleged, was tipped off by one of his friends. The hubby, Martin Muriithi, a former pastor, rushed to the guest house on the outskirts of town only to find his 35-year-old wife stark naked in bed. The two were forced to lie on top of each other before the husband, as friends began beating them with the public cheering from outside as the two ‘love birds’ pleaded for mercy. A good samaritan called police and area OCS Saidi Sudi and his officers had to fire into the air to scare the mob, which was baying for their blood. “Had it not been for the quick action by the police, Kabuga and his lover would now be ashes and since this elderly man is in his sunset years, he should repent his sins and lead a decent life,’’ James Muriuki told The Nairobian. Kabuga later claimed he had parted with Sh5,000 for a session with the woman and thus saw no wrong in getting value for his money. He said they have been meeting regularly after the woman showed interest in him. The woman alleged that her husband ( Muriithi) had neglected his matrimonial obligations and that he no longer provided for their kids. She claimed she resorted to look for a plan B. “I love Kabuga too much and no matter what, I am going to stick to him since he has proven to be a responsible man as compared to my good for nothing husband,’’ she said. The jilted husband, however, differed with his wife over the allegations and insisted he paid her parents Sh49,000 for dowry, a few days ago.
‘’Even after paying her dowry this woman has continued to engage in illicit affairs with different partners right in my face, enough is enough,’’ he vowed. He said he would demand his money back from her parents or the elderly man if he wanted to keep the woman as his wife. Murithi later snatched the Sh5, 000 from his wife’s handbag explaining that it will form part of the dowry recovery process. Kabuga, on his part, said he loved the woman despite their age difference.