WTF AFRICA- MAN ENDS UP IN FIGHT WITH PROSTITUTE 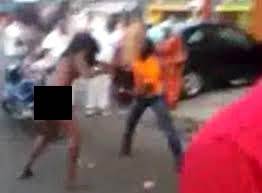 There was drama over the weekend at Shirikisho Lodging in Meru town after a commercial sex worker attempted to chop off a client’s p*n1s for refusing to pay for her services whe offered him on Friday night.
The petite prostitute popularly known as Kadogo said that they had agreed on Sh 1,000 for an all night service and Elias Mwenda paid a downpayment of Sh 500 and was to clear the balance in the morning.
However, in the morning, Mwendwa breached their agreement and said that he was not going to pay more because her services were not as good as he expected. Kadogo kept calm and excused herself to go for a short call only to come with a broken bottle.
She reached for Mwenda’s private parts which were exposed as he lay flat on the bed facing up. A commotion ensued that lasted 10 minutes as the man wrestled Kadogo and snatched the bottle from her hands and escaped n3k3d.
He was lucky to be alive and had some slight bleeding from his manhood.