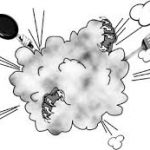 A 46-YEAR-OLD philanderer from Bulawayo’s Queens Park East suburb learnt the hard way that cheating does not pay when two women he had been secretly dating ganged up against him and gave him a thorough hiding.

They went on to detain him for the whole night.

Western Commonage magistrate Mrs Tancy Dube heard how Edson Muinzani of Number 9 Denrigh Road in Queens Park East was assaulted and later detained by Mpoe Marvellous Moyo (27), one of the two women he had been dating.

The court was told that on 13 June at about 11pm, Muinzani went to Ms Manyara Masendewe’s house at Number 8081 Nkulumane suburb.

Masendewe is one of Muinzani’s girlfriends and the two lovers had made an arrangement to spend the night together.

However, little did Muinzani know that Masendewe had secretly planned with the man’s other girlfriend, Moyo to punish the philanderer for his dirty antics.

Prosecuting, Mr Frank Ncube said when Muinzani arrived, Masendewe quickly led him to the bedroom where he stumbled on the already furious Moyo standing right behind the door.

An altercation ensued between the trio during which Moyo summoned her friends who are still at large and they teamed up and assaulted Muinzani.

Soon after beating him, they poured cold beer on his face and detained him the whole night.

Muinzani woke up the following morning and went to the police station and reported the matter leading to Moyo’s arrest.

The other accused persons are still on the run.

In giving testimony, the complainant told the court that his cellphone went missing during the scuffle.

Moyo who is facing assault and theft charges was remanded to today for judgment.