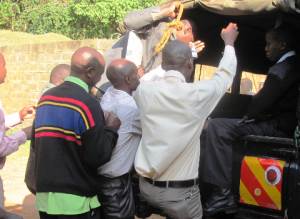 A 28 year old man is the talk of Busibwabo village of Bukhayo West location, Busia County, after he eloped with his sister and resurfaced to announce their marriage.
The man, who lived in Nairobi and survived through working in mijengos, invited his sister to stay with him so that she can improve her living conditions. A year passed by and the two cut off their communication with their relatives up country. No one knew Nairobi and so it was impossible for them to trace the two. Relatives kept waiting hoping that one day they would come back.
Over the weekend, they made their grand return and announced their marriage. The sister is heavily pregnant and it was obvious that they had been enjoying the forbidden fruit.
Shocked villagers converged an urgent meeting where the man explained that since they have different fathers, they are not related and can as well go ahead and marry each other.
The village elder referred to the incident as an abomination saying that one is not supposed to ‘uncover’ his mother’s daughter and warned them of doom if they continue with their marriage plans.