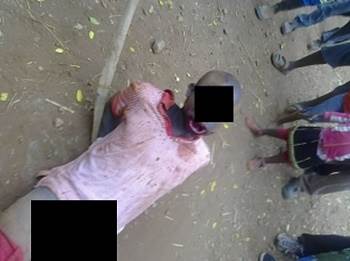 A 26-year-old man suspected of raping his 16-year-old girlfriend in front of her mother is recovering in hospital after police rescued him from angry community members.
The incident happened at Nkomo village near Giyani in South Africa on Monday morning.
“The suspect was rescued from the angry mob and taken to Nkhensani Hospital.
He is currently under police guard while the police still investigate the case,” said Giyani police spokesman Warrant Officer Thomas Makhubele on Tuesday.
According to witnesses, a man broke into a local woman’s house at around 4am on Monday, grabbed the girl and threatened to stab her with a screwdriver if her mother, who was in the same room as her, did anything to stop him from having raping her.
“He then raped her while her helpless mother watched and unable to act for fear that if she did he would stab her daughter to death,” said a neighbour.
The neighbour said the attacker then robbed the mother and daughter of their cellphone, some cash and a blanket and fled the scene.
“One mistake he did though was to fall asleep while at his hideout, not knowing that the community was tracking him down.
They found him asleep and beat him up and forced him to reveal his accomplices,” she said.