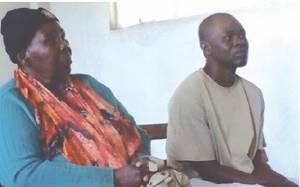 A GRAN NY from Mzilikazi suburb in Bulawayo came up with a shocking reason why she approached the court seeking a legal recourse against her son saying he threatened to “fix” her by forcing her to watch him while having sex with his girlfriend.
Hlalaphi Dube said the Biblical advice that one should respect his or her parents so that his or her days would be many on earth had no meaning for her son Jethro Dube who was in the habit of verbally and physically abusing her. She said Jethro was also making her life miserable as he turns violent wherever she wants to reprimand him.
The woman bared her troubled soul last week at the Bulawayo Civil Court where she was seeking a protection order against her son saying he was not respecting her.
“I am seeking a protection order against the respondent Jethro Dube who is my son. His is very violent towards me. He is in the habit of verbally and physically abusing me. He takes money from the tenants without my consent and yet that money is supposed to be for my upkeep. Jethro does not respect me as his mother.
“I have tried to reprimand him on several occasions but to no avail. The other day I reprimanded him and he said to me he was going to fix me by bringing his girlfriend at home where he will force me to watch him while having sex with her. Because of all threats and abuses I am now seeking the intervention of this honourable court to grant me a protection order against him,” she said.
However, in response Jethro disputed his mother’s claims saying she was lying so as to invite the magistrate’s mercy so that she can grant the protection order in her favour.
“What she said is not true. I do not verbally or physically threaten her as she is claiming before this court. I really do not know what she said, she just wants to convince the court to grant the protection order against me,” he said.
Nonetheless, as the saying goes that you cannot always win a war against your parents, Jethro’s mother emerged as a victor after presiding magistrate, Marylene Mtshina, granted the protection order in her favour which orders him not to verbally and physically threaten her or take rentals
Sex
Source: B-Metro
– See more at: http://bulawayo24.com/index-id-news-sc-local-byo-52802.html#sthash.xHETUm6f.dpuf