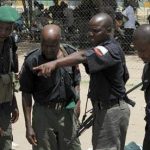 According to police sources, the pastor, Dare Adewole, reportedly of the Christ Gospel Apostolic Church at 32/34 Karimu Ilaka Street in the Egbeda area of the state, was caught by policemen attached to the Idimu area while attempting to bury the remains of the yet unidentified child.

According to reports, Adewole was initially detained at Idimu Police Station but had since been transferred to the Homicide Section of the State Criminal Investigative Department of the Lagos State Police Command in Panti, Yaba.

According to police, the suspect was arrested after a tip-off by neighbours of the pastor, who had reportedly been monitoring him when they noticed his movements. Some his neighbours said they had always been suspicious of the pastor.

One of them said: “People had always doubted his sincerity of being a man of God due to the way he behaves.”

The acting image maker in charge of the state police command, Damasus Ozoani, confirmed the incident.

Ozoani added: “It is true the police have made arrests but I cannot tell you the number of arrests.

“The case is beyond what the division can handle. It has been transferred to the State CID, Panti.”

Ozoani further stated that the police were yet to identify the two-year-old girl.