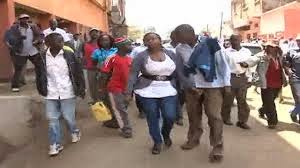 There was drama over the weekend at a church in Kirinyaga after the pastor was chased away for having an affair with a church member who is a widow.
Bishop George Ngigi of African Inland and Pentecostal Churches of East Africa was caught in a compromising position with the lady in her house at Riakiania and worshippers threw him out.
According to a worshipper, Ngigi visited this particular lady on many occasions in the name of comforting her and encouraging her and her children to remain faithful to God despite losing their father.
The Bishop even appointed her as the chairperson of the church and this gave them more time to be together without any suspicions.
On Sunday, he was denied access to the church because of his randy behaviour and being a bad example to other church members. He created a scene because he was reluctant to leave accusing his fellow pastor of teaming up with the worshippers to throw him out.
However, he was overpowered and forcefully evicted from the church compound.
The widow was demoted and her position given out.