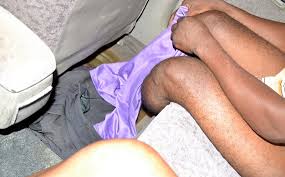 A married Methodist Church in Zimbabwe pastor was reportedly caught engaging in sex with a married mother of two on Monday afternoon.
The man of God-cum-man of sex, Rev Nobert Chivese from Mabvuku was caught red-handed busy fornicating with Fortunate Safuri in a parked car in Beatrice. The married pastor was supposedly having vigorous sex as the car was reportedly spotted ‘bouncing’ as the adulterous man of God was in the middle of his sex round.
The cheating woman who was conducting some sexual ‘prayers’ with the married Reverend is said to be married to a police officer, Allen Tafirei who is stationed at Beatrice Police Station. The cop and his cheating wife have been married since 2006.
According to evidence supplied, the man of the cloth left his wife, Mai Mufundisi Chivese at home in Mabvuku and visited his married lover in Beatrice before parking his car, Honda Fit registration number ADJ 8582 in a bushy area close to the Harare-Masvingo highway and have a steamy ‘sausage in sausage out’ session in broad day light.
“They parked their car a distance from the road in a bushy area so they can sexually satisfy each other,” said the source.
Reports are that some officers in the Criminal Investigations Department (CID) VTS saw the car parked and bouncing like mummy and daddy’s bed and their attention immediately got attracted.
“The CID officers then went there to see what was taking place inside. Upon seeing people coming towards the car, Reverend Chivese who was engaging in sex in the back seat, rushed to put on his trousers and jumped onto the driver’s seat before attempting to speed off,” added the source.
Police officers however would not let the sex loving pastor go uncharged. CIDs pulled out guns and the Mabvuku Methodist Church Superintendent feared for his dear life then stopped the car and quickly wore his shirt. That means, the married Mufundisi was undressed when he was having car sex with the married policeman’s wife. Probably the only thing he was wearing was a condom, but Zimbabwe News could not verify if he was wearing it!
At least the pastor managed to put on his clothes quickly. His cheating lover was still undressed by the time police officers arrived at the ‘sex scene’. She was caught red-handed in her chocolate-coloured birthday suit. She must have been thoroughly ‘sexed’ by the Methodist minister that she lost energy to quickly dress up.
Unconfirmed reports allege that sperms were also found on the back seat of the car which was engulfed with a strong fish-like smell after the cheaters were disrupted from enjoying their ‘pumping gymnastics’.
Mufundisi Chivese who is well known for being strict and accusing Mabvuku Methodist youths of being disorganised was immediately arrested for engaging in sex in public. His married lover was arrested as well. The police officers were very kind and understanding enough as they gave the undressed married woman time to first dress and cover her ‘honey jar; which had just been ‘serviced’ by a man of God. She then wore her red dress but was not given time to put on her blue ‘parachute’ underwear . Even the pastor was reportedly not wearing an underwear as well as there was no time for that. He literally risked injuring his ‘disturbed anaconda’ with the zip of his trousers, but there was nothing he could do anyway.
The cheating couple was escorted to Beatrice Police Station where they were charged with public nuisance and fined US$20 each. Investigations conducted by an online news website have revealed that in Harare it costs US$10 to book a lodge and have sex with your girlfriend (or prostitute) for one hour, while in Beatrice and other small towns it costs just US$5 per hour. The man of God had to part with US$40 which obviously forms part of Methodist church members’ tithes and offerings to pay for his fine as well as his small house’s.
Probably Rev Chivese had been used to bush sex and not lodges sex as he was previously stationed at Ngezi Bethel before being ‘promoted’ to Mabvuku in Harare.