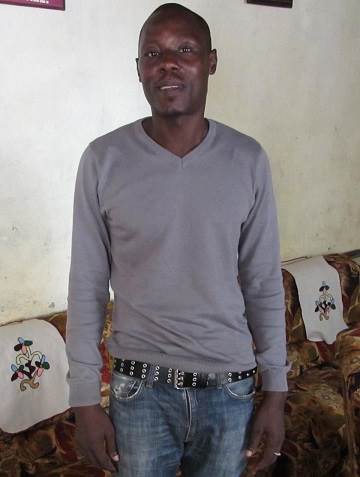 In this July 2012 photo, Roger Jean-Claude Mbede poses for a picture in the home of a friend where he had sought refuge, in Yaounde, Cameroon. Mbede, a gay man who was jailed for sending a text message to another man saying 'I'm very much in love with you,' and who was later declared a prisoner of conscience by Amnesty International, died on Friday after his family removed him from the hospital where he had been seeking treatment for a hernia, lawyer Alice Nkom said. 'His family said he was a curse for them and that we should let him die,' she said. (AP Photo/Anne Mireille Nzouankeu)
.
View gallery

In this July 2012 photo, Roger Jean-Claude Mbede poses for a picture in the home of a friend where he …

YAOUNDE, Cameroon (AP) — A gay man in Cameroon who was jailed for sending a text message to another man saying “I’m very much in love with you,” and who was later declared a prisoner of conscience by Amnesty International, has died, according to a lawyer who worked on his case.

Roger Jean-Claude Mbede, 34, died Friday roughly one month after his family removed him from the hospital where he had been seeking treatment for a hernia, lawyer Alice Nkom said.

“His family said he was a curse for them and that we should let him die,” she said.

Mbede was arrested in March 2011 in connection with the text message and convicted the following month under a Cameroonian law that imposes up to five years in prison for homosexual acts. He received a three-year sentence.

Cameroon brings more cases against suspected gays than any other African country, according to Human Rights Watch. The rights group said in a March 2013 report that at least 28 people had been charged under the law in the past three years.

Mbede developed the hernia while in prison. In July 2012, he was granted provisional release on medical grounds, according to Human Rights Watch, and went into hiding. An appeals court upheld his conviction in December 2012.

“I accuse the state,” said Nkom, the most prominent of a small group of lawyers in Cameroon willing to defend suspects charged with violating Cameroon’s anti-gay law. “If there had not been criminalization of homosexuality, he would not have gone to prison and his life would not be over. His life was finished as soon as he went to prison.”

Cameroonian officials have been unapologetic about their enforcement of the anti-gay law, and have rejected recommendations from the U.N. Human Rights Council to protect sexual minorities from violence. Appearing before the council in September 2013, Anatole Nkou, Cameroon’s ambassador to Geneva, testified that a prominent gay rights activist found tortured and killed last year died because of his “personal life,” prompting outcry from international rights groups.

Lambert Lamba, a Cameroonian activist who works on behalf of sexual minorities, said Mbede had been out of the hospital for about one month prior to his death and had received no medical care during that time.

“His family said they were going to remove the homosexuality which is in him,” Lamba said. “I went to see him in his village. He could not stand up, he couldn’t speak.”

Neela Ghoshal, senior LGBT rights researcher for Human Rights Watch, called on Cameroonian police to investigate Mbede’s death in light of reports that he may have been barred from receiving medical treatment.

“Roger was a courageous man who became an accidental activist after he was arrested simply for expressing his love for another man,” Ghoshal said.

Alexandre Marcel, president of the French committee for the International Day Against Homophobia and Transphobia, condemned the family’s actions in a statement, saying they were a reminder that sexual minorities must fight prejudice at both the family and state levels in anti-gay countries around the world.

Also on Friday, six men in neighboring Gabon were released after being accused of taking part in a same-sex marriage ceremony last month. Officials who held them for one night decided not to bring charges against them after determining that no marriage had occurred, said prosecutor Sidonie Flore Ouwe.

Gabon is one of 11 countries in sub-Saharan Africa that have not criminalized homosexual acts, according to Amnesty International. However, Ouwe said that a gay marriage ceremony would constitute obscenity and an affront to public order punishable by law.