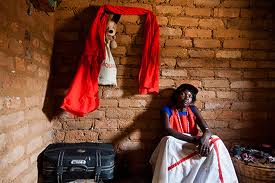 A 28-YEAR-OLD man yesterday told a Bulawayo magistrate that his marriage was on the verge of collapse as a “spiritual husband” has been sleeping with his wife for the past four years.
Mkhululi Masango who was dragged to the Civil Court by his 23-year-old wife, Elizabeth Thabethe, claimed that he has not been intimate with his wife for the past four years and was considering divorcing her.
He told magistrate Victor Mpofu that “someone” blocks him from engaging in sex with his wife.
“Your worship, every time I want to sleep with Elizabeth I get so weak and it feels as though someone or something is blocking me. We consulted elders and they told us that she has a spiritual husband,” said Masango.
He said he had resorted to bringing another woman into their matrimonial home in order to satisfy his sexual appetite.
Thabethe, who was requesting a protection order against her husband, claimed Masango has been subjecting her to physical and emotional abuse because of the issue.
Magistrate Mpofu told the couple to seek spiritual assistance instead of resorting to violence.
“I’d advise to seek spiritual advice instead of constantly fighting over the issue. If you still love each other and have hope for your relationship, you’ll find a way to overcome this situation,” said the magistrate.
He granted Thabethe the protection order and ordered Masango not to physically abuse her.