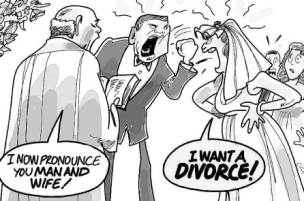 In what seems to be a cruel twist of events, a man returned home in Dande from jail to find his wife married to another man.

Lawrence Muronza returned home after serving his 3-month jail sentence at Harare Central Prison hoping to quench his 90-day-long SEX DROUGHT only to find that his wife, Nomatter Masuka, had married a domestic hand in Avondale within a space of 90 days.

To add salt to the would, Nommater had already obtained birth certificates for her children with Lawrence using her new lover’s surname, thereby leaving the ex-convict hubby with no family. The unfortunate ex-convict got to know of the devastating news when he approached his in-laws to enquire the whereabouts of his family.

The news came to light at the Harare civil court where Nomatter was applying for a protection order against Lawrence, presumably for the lovebirds to have their time with no disturbances.

“The most painful thing is that I was served with these court summons by her new husband. I was arrested and spent three months in jail and she didn’t bother to come and see me. I did not know that she was already married to another man. When I finished serving my sentence I then returned to look for my wife and her parents could not furnish me with details until I tricked them.

Lawrence told the court that he went on to report the matter to the chief who summoned Nomatter to appear for a hearing.

“I then reported the matter to the chief in our rural home and she was summoned to appear before the chief’s court and she confessed that she married another man and no longer loved me. I then asked about the issue of birth certificates for the children and she denied but I am reliably informed that she obtained birth certificates for my children using her new man’s name,” he said.

Nomatter confirmed the development saying she had found a REAL MAN (murume chaiye). She concurred with Lawrence that she took the children and is staying with them in Avondale with her new husband.

“He (Lawrence) is the one who started to abandon me and I had no option. I was admitted in hospital with our eldest child and he didn’t bother to come and see me. After that I then heard that he had been arrested. While he was in jail, I could not fend for the family and I was given money by my parents to come to Harare to look for employment and I trained as a security guard.”

“I eventually found a real man and when he (Lawrence) came back from jail I heard that he went to my parents looking for me and I told them not to tell him my whereabouts until he found us. He is now disturbing my peace with my new family and I no longer love him,”she said.

Nomatter told the court that she wants Lawrence barred from phoning or texting her.

“I want the court to stop him from phoning me along with my husband,” she said.

Magistrate Rebecca Kavhiya who presided over the case granted the order in Nomatter’s favour and barred the ditched man from phoning or texting his former wife.