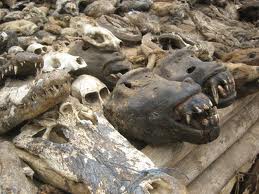 A CHITUNGWIZA man told Civil Court magistrate Marehwanazvo Gofa on Tuesday that his wife had consulted a traditional healer and “disabled his manhood” in a bid to fix him.

Munyaradzi Chiturike made the sensational claims after he was dragged to court by his wife Simbisai Chiturike, who was seeking a protection order and custody of their three children.

“She left home on February 22 this year and she consulted a traditional healer, locked my manhood and I have never had an erection since that time,” he said.

Simbisai, who is now staying at her workplace in Dema, told the court that her husband was abusive and would shout obscenities in front of their children.

“He is a drunkard and at one point, he even got into my mother’s blankets while he was drunk,” Simbisai told the court.

Gofa ruled: “This relationship is not peaceful hence there is need for a protection order and custody favours the mother as the children are still young.”
Manhood Sangoma