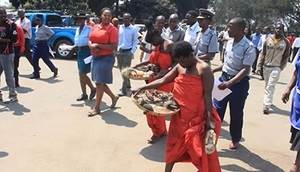 TWO women who were reportedly found undressed, sitting in winnowing baskets with an assortment of paraphernalia associated with witchcraft, including an owl, in the wee hours of the morning, are said to have stage managed the event in cahoots with a self-styled prophet seeking popularity.

The women, who set tongues wagging in the capital, are said to have been hired by fake prophets to masquerade as witches so that they (prophets) could draw clients.

Instead, the two are known “prostitutes” from Chihota Communal Lands and not from Nembudziya, Gokwe as they initially claimed. It has also been established that they used pseudonyms on arrest.

The women called themselves Chipo Chakanja and Maria Moyo. Both “witches” were wearing “skin tights” and had winnowing baskets with an assortment of muti, a red snail, animal hides and a live owl.

One had short natural hair while the other had a “fancy but overstayed hairstyle”. Both had their fingernails polished. They smeared what looked like charcoal or some unknown black substance on their bodies and faces – from their waists upwards.

Investigations revealed that the women lied about their names and where they had come from. On Monday, The Herald went to Landos, Chihota, a few kilometres from Harare and spoke with the relatives of the pair who confirmed that they were women of easy virtue.

It is said the events of last Wednesday were staged, but things went awry. The woman who identified herself as Chipo Chakanja is in fact Christine Matiyenga (28) and the one who called herself Maria Moyo is Elnette Jinya (age not given), both from Chihota.

Since their arrest on allegations of witchcraft, the rooms they rented were locked up and their relatives including one of the women’s lover were worried about how they got into the deal.

Information gathered show the deal initially involved six women and all wanted to take part in the botched pact, but the others chickened out as they feared “practising witchcraft”.

This left the two courageous ones. The message sent to the media revealed the names of the others who refused to take part in the arrangement saying: “These are the other two ‘witches’. They were a group of six Mellisa, Precious, Forget, Pauline. They know the truth. They are the ones who escaped. We were ashamed of talking because they were present (during the interview).”

The live owl they had in Budiriro is said to have been bought at Landos Business Centre from a man who captured it in a grinding mill. Word doing the rounds is that the two women entered the deal after being promised lots of money by the self-styled prophets.

Some of the money was paid before they became “witches” in Harare but it is not yet ascertained how much they were given. Nyaradzo Mubako (34) who stayed with the two said they were together the previous night.

“We stay together and I was very surprised. We were together the previous night and they were picked by a certain car. I just heard that Mai Fa*** (Elnette) and Christine were caught in Harare undressed and practicing witchcraft.

“These two are not witches, they are just looking for money but this is so embarrassing,” Nyaradzo said.

Mai George Toddie (37) said she does not believe the two are witches but prostitutes who are well known in Chihota. Filda Munyama (33), who is Christine’s landlady, said they spent the afternoon with the “witches” before they were caught in Harare the next morning.

“We spent the day plaiting Mai B’s hair. They left at night and were ferried by a blue Navarra (Nissan Registration No. ACM 7249) when they left for Harare.

“They carried winnowing baskets which they were later found with when they “turned witches”.

“They are not witches but had been promised a lot of money by a Harare prophet who works with Zunzamandere, traditional healers from Chihota who hoodwink people,” Munyama said.

When asked about her car and who was using it, the woman said: “I sold the car three years ago to a man who is not a prophet. Maybe the prophet later bought it from the person I sold it to. My son is not here, he has all the paperwork, I could have given it to you,” the woman said.

The same car was seen by this news crew at the house where the “witches” were caught last week. It is believed the car dropped off the undressed self confessed “witches” at the house at 4 am.

Christine’s brother, Kingstone Matiyenga (27) said he does not get along with his sister because of her uncanny behavior.

“What Christine did is embarrassing. She does a lot of other embarrassing things including pretending to be a witch because of the love of money.

She is not a witch, she used to cook sadza and sell it at Landos. We just heard from the newspapers, radios and television that they fell off winnowing baskets at a shrine. “We were seven in our family and both our parents are dead.

Even our brother in Harare does not approve of her behavior. She was just sobbing when I went to visit her in jail. She could not talk to me and it is said she has not been eating for days,” Kingstone said.

He urged police to arrest the fake prophets who he says sweet-talked his sister into masquerading as a witch.

“What I know is that Christine was in love with a certain traditional healer, Zunzamandere (Zunza), who compelled her to get into the difficult situation she is in now,” added Kingstone.

He said he suspects that the traditional healer and prophets first intoxicated the two before they agreed to become “witches”.

“The way our fellow villagers looked for money is an embarrassment of the whole area,” said Talent.

Christine’s uncle, Goodwick Adam (33) said the two were approached by Harare based prophets who work with a witch hunter (Tsikamutanda) and agreed that they pretend to be witches at a house or shrine where the prophets operate from.

“The owl found in their possession was caught here at Landos in a disused grinding mill. It was trapped by nets and the person who caught it charged $80 but was only paid $20,” Mr Adam said.

Some of the things that were used came from Elnette’s house. She was once married to a fake traditional healer one Innocent Komboni Jinya.

Jinya who was a self-confessed witch hunter died on June 1 this year.

He was once arrested and stayed in prison for five years after he was found guilty of tricking people by throwing strange items he claimed were used for witchcraft purposes.

“The medicine, hides and snails that were in the winnowing basket came from Mai Fa***, and belonged to her late husband. When he died, she did not hand over the things to his relatives.

“The husband used to trick people until he was arrested alongside his eight accomplices. Mai Fa*** carried on with the trade with other fake witch hunters, and also became their lover,” said a man who did not want to be identified.

Christine or Mai Evans is from Muhove Village, near Landos and both her parents are late. She has three children and the eldest is in Form One in Hwedza with his or her father, but the other kids stay at her late parent’s home in Chihota.

“The person who captured the owl is Christine’s relative, Tindo. Please do not publish my name, I will be harmed because this issue involves money. The relatives are well known for assaulting people. I will become homeless,” said a certain woman.

Cana Chiriseri (30), who is Christine’s sister – in – law (brother’s wife) described what her in law did as unspeakable.

Chritstine’s friend – Rachel Chimema (19) – said her friend did not tell her anything and she was shocked to hear that she had been arrested for witchcraft.

Peter Muchabaiwa (36) who claimed to be Christine’s lover said he was embarrassed by what his partner did.

“My prostitute embarrassed me. I do not know where to hide, people are now calling me ‘husband’ of a witch. She should have told me that she wanted money. I could have looked for it instead of her doing this,” he opined.

Linda Moyo (25) said the two were not witches but well known prostitutes.

Pauline Tavirimirwa (27) also confirmed that the two were prostitutes.

Petronella Mlambo, popularly known as Wasu and works in a bar at Landos also refuted allegations that the two were witches adding that they were just looking for money by any means, prostitution included.

Peter Munindwa (75), Elnette’s neigbour said he arrived home from work and found her door locked only to hear that she had been found undressed in Harare.

“Both Elnette and Christine are not witches, they are just prostitutes. A prostitute can do anything,” said Sekuru Munindwa.

Tazvitya Nzuwa (78) said cases of people being tricked by witch hunters were prevalent in Chihota.

“These people should be arrested, look now our children are now being labeled witches. They are not witches but prostitutes,” he said.

A woman who preferred anonymity said she almost became part of the deal.

“Mai Fa*** and Christine came to my house saying they had struck a deal which would give us a lot of money with a Harare prophet. They said the prophet drove a Navara.

They said they would go that night and return with loads of cash the next morning.

“I asked what the deal involved and they remained mum and as they were planning they were already looking for a shop to rent. The rentals would be paid using the money they would have made,” said the woman.

Elnette’s sister-in-law (husband’s sister) – Mai Agnes Jinya (52) – said she was surprised by what she did.

“We used to stay together in Jinya village when my brother Innocent was still alive. Elnette moved to the ‘township’ where I also now stay after my brother died. They are both not witches, they love money too much but this time their greed was too much.

“She has two kids – our village head is Ukama. When the two were arrested, Elnette’s children went to stay with my brother,” said Agnes.

Meanwhile, the two women were remanded to September 26. In an interview with The Sunday Mail from Chikurubi Maximum Prison last week, the two said they were being used by evil spirits and repeated their claim that they were from Gokwe.

But since this story was broken, not one person in Gokwe professed to knowing them. The prophet who operates from the house where the two “fell off” – Madzibaba Matewu Alfreddie Mupfumbati (30) of the Ungano yaVapositori Church – said they denied paying the women to masquerade as witches.

“People cannot be stopped from saying what they like. I just help people through prayer. God is the one who exposed the witches. I started praying and prophesying when I was in Grade 7. I was a member of the Mugodhi Church in Dotito, Mount Darwin,” he said.

He also dismissed rumours that the Navara which ferried the women was later spotted parked at his shrine. Mathew Jiya (29) of Mhondoro who works with Madzibaba Mupfumbati said he was not surprised that “witches” were found at their shrine as bigger things had happened there, but they kept a low profile.

The room in which the “prophets” operate from contains traditional walking sticks, red wrapping cloths and traditional medicines despite them saying they do not use such.

When these women were caught undressed, they were taken to Budiriro Police Station and later Mbare Magistrates’ Court while wrapped in red cloths, similar to those in the “prophets”‘ house.

It is said the “prophets” gave them the wrapping cloths. Ever since the “witches” were found outside the Budiriro home, business has been booming for Madzibaba Mupfumbati and Matthew Jiya with many flocking to them for assistance.