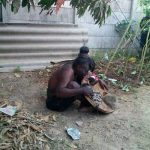 The two women who were caught undressed at a house in Budiriro suburb recently have been released from custody after paying $200 bail each.

The infamous two women were released on bail by Mbare magistrate, Reuben Mukhavhi after state prosecutor, Fanuel Madanire consented to the application for the duo’s release by their defence lawyer, Tawanda Takaindisa.

The two and their associate Alfred Mapfuimbire, a self proclaimed prophet who is on bail, were ordered to report three times weekly at Budiriro Police Station and will now appear for their trial on the 15th of October 2013 before the same court.

It emerged in court that the two had given false names with the first accused lying that she was Chipo Chakaja when her true name is Christine Nyamupandu, while the second accused Elinet Ben had lied that she was Maria Moyo.

Both live at Landas business centre in Chihota communal lands.

The two women were declared to be normal by medical doctors.

The trio faces charges of engaging in practices associated with witchcraft.