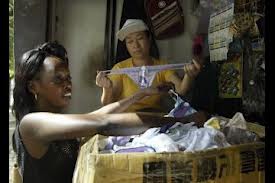 A woman from Sizinda in Bulawayo claimed that she was having sleepless nights after she allegedly lost her underwear to her lover’s girlfriend who threatened to “fix” her.
Ruth Ndlovu is living in fear suspecting that her rival Siphilakahle Dube from the same suburb might bewitch her after she allegedly came to her home during her absence and sneaked into her bedroom where she allegedly took her underwear.
Ndlovu on Friday last week pleaded with magistrate Marylene Mtshina sitting at the Bulawayo Civil Court to compel Dube to return her undergarment.
“I am always scared. This woman might do something bad to me after she came to my house during my absence and entered into my bedroom where she ransacked my drawers and took away my underwear. I am now living in fear that she might bewitch me since she said she was going to fix me for snatching her man who is also my boyfriend.
“She once approached me in the company of my boyfriend and verbally insulted me labelling me a prostitute. The other day she waylaid me on my way from church. The missing underwear has stressed me and I am asking this court to compel Dube to bring it back. I also pray to this court to grant me a peace order to stop her from coming to my house again,” pleaded Ndlovu.
However, Dube disputed Ndlovu’s claims saying the man at the centre of the controversy was the father of her child. She claimed that: “The man she claims is her boyfriend is also my lover and we have a child together. As we are speaking I am four months pregnant and the man in question is the one who is responsible. The only time I confronted her was when I saw her with the man at the centre of attraction. I know nothing about the pant she said I took from her house,” responded Dube.
The magistrate apparently as way of avoiding another comic complaint of missing underwear, ordered Dube not to go to Ndlovu’s house as well as not to disturb her peace and love by verbally threatening her.
Court
Source: B-Metro – See more at: http://bulawayo24.com/index-id-news-sc-local-byo-54854.html#sthash.4Li1ULgm.dpuf