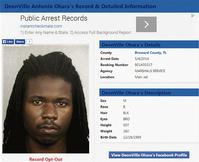 ZJ Wah Wa has been arrested in the United States.

According to the Broward Sheriff’s Office website, ZJ Wah Wa is currently in custody at Broward County in Florida.

The website states that 24-year-old Wah Wa, real name Deon-Ville Antonio Ohara, has been in police custody since May 5 this year. It is understood that he was arrested by the United States Marshals Service.

Despite numerous searches, the website did not state the reason for his arrest, nor did it give an expected release date.

It, however, stated that he is in the main jail and in Marshal’s Hold. There was also a visitation schedule.

When THE weekend STAR contacted the Broward Sheriff’s Office via telephone last night, an officer said he was unable to say what ZJ Wah Wa was charged for, or when he would be released, because he is being held at the jail for the United States Marshals Service.

However, when contacted, the United States Marshals Service office was already closed.

The Unites States Marshals Service has been serving the United States since 1789. It is responsible for fugitive operations, witness security, prisoner transportation, prisoner operations, asset forfeiture and judicial security.