Aletia Strachan,102, was climbing trees, swimming in her 90s 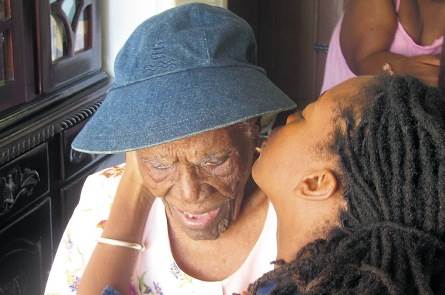 AS she sat with the eldest of her 16 great grandchildren and her caregiver on Thursday, Aletia Strachan, 102, was bent on sending across one message — that of not being a bother to anyone, even at her age.

“Mi nah give no trouble. All mi want is for someone to give me something to eat. Mi old and mi do [some things] for myself, but mi nuh fool; 100 years old and mi nuh fool!”

“That’s 102!” Danielle McNish, her great granddaughter corrected her in a tone she could hear.

“All right! 102 and mi nuh foolish. Mi know when mi want do mi ‘business’ mi nuh foolish,” she said. “Thank God! Some people funny and foolish, but mi nuh foolish.” “An mi nuh give nuh trouble to eat. Mi nuh do that!” she added.

Though she had trouble hearing, Strachan remembered a lot from her past and spoke about getting married, her favourite grandson who died in a car crash on Mandela Highway in March this year, and necromancy that was rampant when she was younger.

Born on the July, 8, 1911 in Martha Brae, Trelawny, Strachan was the first child for her father and the fourth for her mother — total of seven children, with her falling smack in the middle. All her siblings have predeceased her.

Growing up with a father who was a farmer, and a mother who was a housewife, Strachan assisted in looking after her younger brothers and sisters.

At age 28, she gave birth to her only child, Laura, who now resides in the United States.

When her daughter was only three years old, Strachan made her way to Kingston where she worked at various jobs. For the most part, her job entailed household helping, where she would wash lines of clothes at a time by hand, then iron them with the self-heating iron. This was a large heavy iron in which charcoal was placed in for heating.

When she stopped working at the guest house, Strachan started working for owners of private dwellings, before giving this up to help care for her seven grandchildren. This was in the early 1960s.

In 1962, she married Talmie Strachan, who died some eight years later from a stroke.

However, up to this day, the centenarian still believes that obeah was the cause of his death.

“Obeah was in Kingston nuff, you know. obeah full Kingston,” she said. “They try fi knock him weh. He was a mason, and when him lift him hand to throw the cement, him hand couldn’t go up,” she said demonstrating with her hand. “Is obeah. Strachan did love church, he was an intelligent fellow. First time, if you a doctor or so they try to knock you out,” she said.

She said that they both attended church, and when the pastor realised that they were in love he planned a “mass” wedding for them.

After her husband passed away, she never showed interest in another man, but busied herself caring for her grandchildren.

While Strachan was originally named Alethia-Ann Lewis by her parents, she thought the name was very old and decided to change it to Aletia.

“In fact, her married certificate has Aletia, but she never did an official change until much later,” Phillips Kelly explained. “She just introduced herself to everybody as Aletia, because she didn’t like the other one. It was officially changed in 2000. But all her transactions before that were done in her assumed name. She told me that that name was old people name, so she throw it away,” she laughed.

There were three things that Strachan absolutely loved — to climb, swim and cook — all of which she did up into her 90s.

“She only stopped cooking because of her age and that was since she was 95,” her granddaughter who lived with Strachan for many years said.

“Up to that point, from I have known her, she has always been cooking. She has a peculiarity with respect to eating though, and she has never eaten anything with feathers. She has always told us ‘I don’t eat feathery things’. But if she prepares chicken for you, you would not know that it was prepared by someone who doesn’t eat chicken,” Phillips Kelly explained. “And she not tasting it when she cooking, and it taste just the way chicken should,” she added.

She said that her grandmother took particular pleasure in cooking, because it was never a part of her working life. She would be up from 5:00 am every day to ensure that a warm meal was prepared for them.

From a child, Strachan would out climb any of the boys she would hang around. She simply loved to climb, and climbed her last tree little over a decade ago.

The story has been told of Strachan, who climbed into an ackee tree in an effort to pick the fruit she loved so much. She was in her 70s. She climbed the tree in the back of the yard and got stuck. When her grandson stopped by from work to get something to eat, he found her in the tree unable to get down. Fortunately, he was employed by the Jamaica Telephone Company at the time and had access to one of the vehicles with the extended ladder. He and his co-workers took on the task of getting her down.

This, however, did not dampen Strachan’s spirit as a climber, as she mounted numerous trees following that incident.

“If there was breadfruit in the tree that she wanted, she wouldn’t need to wait on anybody, she would climb and get it,” Phillips Kelly said. “Ackee? She would do the same. She loved ackee, and she would go to whichever height. If the stick cannot pick it she was going to climb to get it, and she never saw any issues with it because this is something she had been doing from she was a little girl.”

Even at 102, if given the chance, Strachan would still swim, an act that is not only enjoyable to her, but therapeutic.

“But the water has to be warm,” Phillips Kelly said. “So it has to be in the ocean about midday and she will go in for at most 30 minutes,” she stated.

Strachan’s last visit to the beach was about a year ago.

“The peculiar thing is that she learnt to swim in the Martha Brae River, but she only wants to swim in the ocean now. And when she is finished swimming she will air-dry, get dressed and go. She will not wash off those granules of salts at all. When she gets home the most you can do is help her remove the sand from her feet because it is her belief that the salt water must soak into her. This is therapeutic for her and tomorrow is early enough to wash everywhere,” Phillips Kelly said in amusement.

While Strachan never spanked her daughter and grandchildren, she was a no-nonsense person.

“She was very, very strict about things being neat and clean. But outside of that I have never heard my mother say that she had ever been beaten, but she didn’t play,” the centenarian’s granddaughter said.

“And for us grandchildren, I don’t remember ever being reprimanded or spanked. But you know that you couldn’t leave things out of place or it would be hell to pay,” she said.

Strachan’s dream was to become a lawyer or a nurse. However, this only remained a dream for her, as her parents could not afford to send her to school.

She visited the Unites States twice — first in 2000 and again in 2006 for her grandchildren’s wedding. On her return from her last visit, Strachan told the immigration officer that he could keep her passport as she would not be going back. She has not gone back since.

As for the centenarian, who said that she has arthritis in her hand, she still moves around unaided and alert.

“Arthritis mash up my hand,” Strachan told the Sunday Observer. Doctor say nothing nuh do my body so mi must eat vegetable and drink plenty water to wash mi out. But mi nuh see so clear. When mi want read my Bible mi can’t read it cause mi nuh see so clear,” she said.

“Because she used to wash and then iron she is convinced that the hot and cold give her arthritis in her hands,” said her great granddaughter, McNish, who was sitting beside her.

“She not sick or anything. The only major surgery she has had is to remove cataracts. No broken bones, no hip replacements, nothing like that.”

Monica Robinson, Strachan’s caregiver said that the centenarian forgets nothing, and would complain to her relatives if she is ill treated.

“Sometimes she come and feel me in the bed and ask if mi still here. You think she easy?” she laughed. “If you ever do her anything she tell her family when they come and she don’t forget anything. When she sit down, she tell me some long-time things. She have sense,” she said.

“Anybody come stay with me all they have to do is bathe me with hot water, company mi, cook for mi, and take care of mi — that’s all mi need,” Strachan interjected.

Robinson said that Strachan is so active that even now, potatoes are still in the backyard that she planted.

“The neighbours said all when she in her 90s she still planting and giving people. They say she used to bake and give them too,” Robinson said.