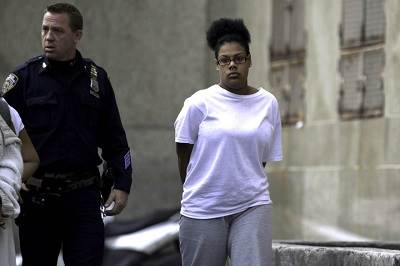 Tiona Rodriguez (pictured) was found with a dead baby in her bag at a Manhattan Victoria’s Secret. An autopsy revealed that the baby boy was born alive, at full term, sources say.

A baby boy found dead in a suspected shoplifter’s bag at Victoria’s Secret was born alive, weighing 81/2 pounds — and now cops are trying to figure out if he was murdered.

Tiona Rodriguez, already the mother of a 2-year-old son, initially told police she was six months pregnant and suffered a miscarriage on Wednesday, sources said.

But her lies were exposed after an autopsy on Friday determined the baby was nearly full-term at eight months. Officials said the autopsy was inconclusive about the cause of death. Results could take about two weeks.

Sources said asphyxiation is one of the possible causes, but investigators have not ruled out other explanations for the boy’s death.

Neighbors at the Marcy Houses in Bedford-Stuyvesant told the Daily News the girl would never harm a baby.

“I don’t believe she would choke her own child,” said Zami Ford, a longtime neighbor.

Police sources said investigators were immediately skeptical of the young mom’s account, especially since she already had a child.

“She didn’t panic with the first one,” a police source said.

Relatives at Rodriguez’s apartment Friday night wouldn’t speculate on what happened to the newborn. “Right now, we’re just concerned about how she is,” a female relative said. “We want to know how she’s doing.”

Rodriguez’s life was turned upside down after security guards at the Herald Square store made the gruesome discovery around 1 p.m. Thursday. They had just confronted Rodriguez and her pal, 17-year-old Francis Estevez, about possible shoplifting and detected a strong odor.

As police were cuffing the teens in a back room, guards searching Rodriguez’s bags for stolen goods found a black plastic bag. Inside that bag was the dead baby, police said. The plastic bag was inside a canvas bag.

On Wednesday night, Rodriguez possibly hinted at her predicament in a Facebook page post that read: “These Cramps SON.”

Rodriguez also wrote on the social networking site that she was excited about a job interview she had Wednesday at a Chipotle.

As news of the charges against Rodriguez spread, her page filled up with expressions of support from some of her friends.

But there were also some haters on Rodriguez’s page like Mark Barkley who wrote, “F— that baby killing smut.”

For now, Rodriguez and Estevez, who lives in Glendale, Queens, are both charged with petit larceny and criminal possession of stolen property.

Rodriguez has no priors. Estevez was charged with criminal possession of stolen property in August and busted for arson in June.

Estevez was found with $209.95 worth of clothes, an iPhone 5 case and cosmetics in her bag, sources said.