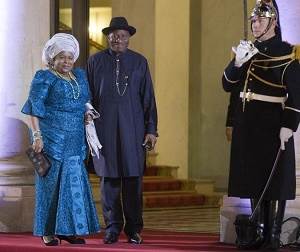 LAGOS, Nigeria (AP) — In the three months since Islamic extremists kidnapped more than 200 Nigerian schoolgirls, 11 of their parents have died, town residents say.
The town where the girls were kidnapped, Chibok, is cut off by militants, who have been attacking villages in the region.
Seven fathers of kidnapped girls were among 51 bodies brought to the Chibok hospital after an attack on the nearby village of Kautakari this month, said a health worker who insisted on anonymity for fear of reprisals by the extremists.
At least four more parents have died of heart failure, high blood pressure and other illnesses that the community blames on trauma due to the mass abduction 100 days ago, said community leader Pogu Bitrus, who provided their names.
“One father of two of the girls kidnapped just went into a kind of coma and kept repeating the names of his daughters, until life left him,” said Bitrus.
President Goodluck Jonathan met Tuesday with parents of the 219 kidnapped Nigerian schoolgirls and some classmates who managed to escape from Islamic extremists. Jonathan pledged to continue working to see the girls “are brought out alive,” said his spokesman of the meeting which press were not permitted to attend. The parents showed no emotion after the meeting, but some shook hands with the president.

93 Users Online
Back to top