13 YO SUSPECTED SUICIDE BOMBER IN NIGERIA 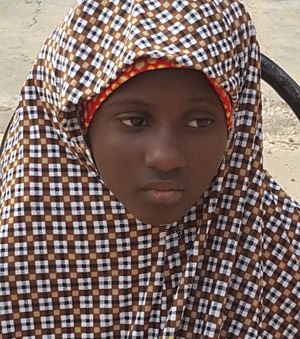 KANO—The ancient city of Kano was thrown into shock yesterday following the confession of a 13 years old suicide bomber arrested by the police at the wake of twin bombblast that rocked the city textile market over how she was conscripted as suicide bomber by his biological father.
14 years old suspected suicide bomber
14 years old suspected suicide bomber
The suicide bomber who identified herself as Zaharau Babangida told a bewildered city dwellers that ‘it began one day when my father took my mum and I to a forest in Bauchi where we met people claiming to be working for God”.
In her confession, the frail looking Zaharau said “in the Bauchi forest I met some other girls who I guessed were my age mate and their leader told us to give our lives to God and enjoy the bounties of heaven’.
I was not moved by the soul searching preaching of bounties in the heaven and it was at this point, their leader resorted to threat and intimidation to obtain my consent. We were shown a deep hole where the leader of the group threatened to bury us alive at a point if any of us refused to play along, and at another time he picked a big gun and threatened to shoot anyone who fails to obey his command.”
Zaharau who told reporters that she hailed from Damaturu, the capital city of Yobe state explained that “it was at this point my father stepped forward to persuade me to play along, and told me to prepare to die as martyr and clear the way for him to join me soon”.
The 13 years old girl who spoke fluent Hausa dialect further said “when I was confronted with option of death, I chose to play along hoping to find an escape route one day”.
Speaking on the Kano bomb blast, Zaharau Babangida said “I and two other girls were conveyed to Kano and quartered at the outskirt of the city by a man I could hardly remember his name, and this same man conveyed all of us to the market square and deployed us at strategic positions at Kwari market on the day we struck.
“I was taken aback when my partners were shattered to pieces barely a second after they detonated. I then rushed out of the scene to pick a commercial rickshaw to a hospital in Dawanau area of the city for medical treatment, and doctors were already attending to me when the driver of the Keke NAPEP resurfaced and showed me a metal object and requested to know whether it was mine of which I answered in affirmative.
“I told him the object he dangled before me is a bomb and its mine, and in no time armed soldiers picked me from my sick bed to their headquarters.”
Earlier in the day, the Department of State Security Services and the Nigerian Police had paraded her as one of the suicide bombers that attacked Kano textile market December 10.
The Commissioner of police, Adelenre Shinaba who was flanked by the state Director of SS, Mr. Basey Ettang explained that the arrest was as a result of synergy among the security agents in the state.
Meanwhile, a suicide bomber who rammed into a military check point in Bajoga, Gombe State in an attempt to perpetrate mass killings of troops and innocent civilians, yesterday failed to accomplish his mission, the Defence Headquarters’ has said.
According to a statement signed by the Director of Defence Information, Major General Chris Olukolade, the attempt by the terrorist to escape also failed as he was brought down by vigilant soldiers when he tried to flee after hitting a military Amoured Personnel Carrier with his IED laden Honda car.
The explosives which failed to detonate have been evacuated and handed to the police.
Also in Kano, security forces have raided the terrorists’ hideout in Nasarawa Local Government Area leading to the arrest of bomb making experts who are already helping in the investigation into activities of bombers lately.
Officers believe that the efforts will yield useful clues.
Meanwhile, the Military High Command has directed troops deployed in all locations of the counter terrorism campaign to sustain the tempo of operations all through the period of seasonal celebrations and ensure that the intention of terrorists to attack civilian target while avoiding troops is duly frustrated.

110 Users Online
Back to top