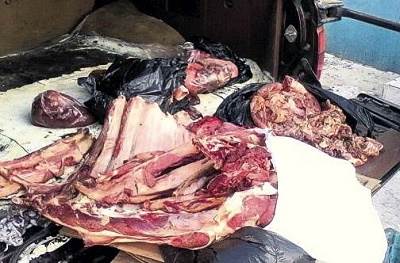 Eleven of the 16 persons who were on Saturday arrested for the unlawful selling of 1,683 pounds of meat, which was seized here at the Charles Gordon Market, will appear in court on April 29 to answer charges of breaches of the Public Health Act, the Food and Drugs Act, as well as unlawful possession of property.

Another person who was charged with unlawful possession of property was held without bail and is appear in the Montego Bay Resident Magistrate’s Court today.

One of the accused who allegedly offered the police a bribe of $100,000 to drop the case, was additionally charged under the Corruption Prevention Act by members of the Major Organised Crime and Anti-Corruption Agency (MOCA).

The 16 persons were arrested during an over six-hour operation during which mutton, beef, pork, fish and chicken parts were seized.

According to head of the Praedial Larceny Prevention Unit Deputy Superintendent Kevin Francis, four of the 16 were released after producing their public health certification, food handlers’ permit and butcher’s licence.

“They did not have them with them at the time [of arrest], so when they were presented we exercised our discretion and released them,” said Francis.

“But 12 other persons were charged for unlawful possession of property, butchering without a licence, selling uninspected meat, no food handler’s permit, no public health certificate and selling meat which is unfit for human consumption,” said the deputy police superintendent.

“The meat that was confiscated was discarded by the NSWMA. The public health officer, who was a part of the operation, condemned the meat, and it was disposed of and taken to the dump site… where police ensured that it was properly disposed of. We also ensured that scene of crime personnel visited the location, processed the scene to ensure that everything was done in accordance with the law,” DSP Francis said.

0 thoughts on “16 PERSONS ARRESTED FOR SELLING MEAT IN MOBAY”