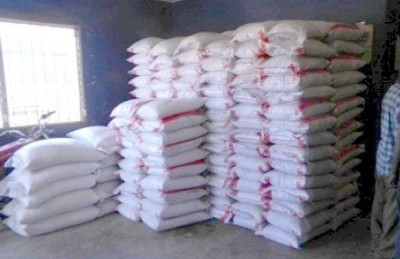 The Nimba Detachment of the Liberia National Police has charged County Health Workers for theft and criminal conspiracy in connection to the theft of about 200 bags of 25kg rice, 10 bags of beans and 15 containers of vegetable oil, intended for Ebola victims.
On late Wednesday October 1, the LNP Ganta Detail arrested a truck marked TP-766 with about 200 bags of 25kg rice, 15 five-gallon containers of vegetable and 10 bags of beans, bound for Saclepea from Sanniquellie.
According to the police the items in question were donated to Nimba by the World Food Programme to cater to those quarantined in the county.
The rice along with other ingredients was stored in two separate store houses, the G. W. Harlay Hospital Warehouse and the Sanniquellie Administrative Hall, under supervision of Nimba County Inspector Reginald Mehn.
But the portion of the rice stored at the G. W. Harlay Ware House was unlawfully loaded on board a mini truck bound for Saclepea for sale.
While the rice was enroute to Saclepea, Police intercepted the car in Ganta upon a tip-off.
From the onset of the investigation, police arrested the Kou Yelegbor, the County’s mental health officer, who is also in charge of ware house and distribution.
Upon investigation, police arrested three other members of the County Health Team, including C. Paul Nyanzee, Community Health Supervisor; Var Bleh, warehouse security; and Sarah Lawehyee, as well as Kou Kouh, a business woman who was alleged to be the one to purchase the items.
The five persons were charged on three counts including criminal conspiracy, criminal facilitation and theft of property, by the Liberia National Police and sent to the court.
A lawyer appealed for change of venue, from Saniquellie Magisterial Court to Ganta Magisterial Court
They are expected to appear at the Ganta Magisterial Court this week to defend themselves.
Since the rice was donated to Nimba, those under quarantine have regularly complained of not having received the rations that should carry them for the 21-day quarantine period.
The arrest of the rice sparked tension in Nimba, with many condemning the county administration for not caring for those dying of Ebola.
When the rice was donated, many thought that it was going to be stored in Ganta which is epicenter of Ebola in Nimba, but instead, it was transported to Sanniquellie.
Initially, the items were being distributed by the County Superintendent, but it was later put under the supervision of County Inspector with health personnel assigned with County Health Team responsible for distribution.
However, Supt. Fong Zuagele, in a press conference held in Sanniquellie early Thursday October 2, condemned the acts and called on the LNP to thoroughly investigate the act and bring those involved to justice.
The County Inspector Reginald Mehn had yet to respond regarding the theft incident. Up to press time, his phone rang endlessly without any response. However, there is speculation that he is a key signatory to the release of any of the food items from warehouse.