A 13-day-old baby girl is dead after Pinellas County deputies say she was pummeled by her 6-year-old brother.

Investigators say Steele left the baby, also named Kathleen, in a vehicle with her two siblings while she went into a cellphone repair store on Monday. While she was inside the store, the infant started crying and her 6-year-old brother snapped, said deputies.

The boy picked up the baby and dropped her on the floor of the vehicle, then “slammed” her around the vehicle, officials say.

Gualtieri says the baby’s skull was cracked and she probably died in the vehicle.

Steele left the children in the vehicle by themselves for more than a half hour, he says. After leaving the store, Steele drove to Enterprise Rent-A-Car and spent another half hour there before returning home, the sheriff says.

According to deputies, the boy admitted to what happened and told his mother about the baby’s condition, but she ran another errand before returning home. Deputies say Steele then called a neighbor, who is a nurse, but the neighbor realized the infant was dead and called 911. The child was taken to St. Petersburg General Hospital, where she was officially declared dead.

In 2010, Steele appeared in a reality show “55 and Pregnant.” The financial advisor and her husband had been awaiting their first son. Since then, Steele’s husband died of cancer in September 2011. The sheriff said she then became pregnant with her husband’s frozen sperm and had another son, who is now 3 years old, and gave birth to baby Kathleen the end of July.

Neighbors say the 6-year-old brother apparently didn’t like the idea of a new baby. An accidental fire was started in their home days before her arrival. 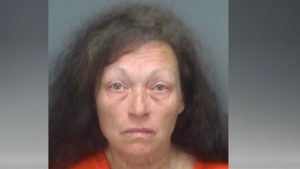 Steele was also under investigation by the Pinellas County Sheriff’s Office Child Protection Investigation Division at the time. At just 3 days old, the baby fell from her car carrier down the stairs of a Treasure Island hotel. Despite a brain bleed, investigators ruled it an accident.

Days later, the sheriff says a complaint to the DCF hotline about the mother’s inadequate supervision couldn’t be proven. Florida Department of Children and Families Secretary Mike Carroll says his department had no prior involvement with the family.

The school district says the first grader will not be returning to Lakewood Elementary. There will be counselors for staff and students on Friday. Pinellas County Schools says it will continue to work with the Sheriff’s Office and Child Protective Services as they establish the best plan moving forward for the child.

The boys are now separated and in DCF foster care.