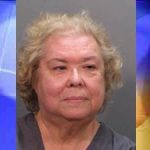 JACKSONVILLE, Fla. – Diana Reaves Costarakis was allegedly prepared to spend $5,000 to have her daughter-in-law, Angela Costarakis, killed. But Costarakis picked the wrong person for the job according to the Jacksonville Sheriff’s Office.

A news release states that Costarakis met with an undercover detective at a Home Depot last Wednesday and made a down payment of $500 for the job. She also provided Angela’s photograph, vehicle description and home address.

On Thursday the undercover detective met with Costarakis again and she paid an additional $1,000 toward the $5,000 total. She also said that Angela wore expensive jewelry and when the job was completed, that the jewelry could be taken off of her body. She said that the diamonds could be sold without a trace to satisfy the bill.

The undercover officer then asked Costarakis again if she wanted Angela killed to which she said, “If you don’t, I will.”

Costarakis was then placed under arrest and was transferred for booking. She refused to speak to investigators without an attorney. She’s been charged with criminal solicitation and criminal conspiracy, both first-degree capital felony crimes in the state of Florida.

Angela Costarakis was interviewed by TV station WTLV and said she was shocked but not surprised that it happened.

“She told me three weeks ago, gave me a big old hug and said ‘I am so glad we are great friends.’ I guess if I was out of the way she could have her son and her granddaughter,” Angela Costarakis told WTLV.