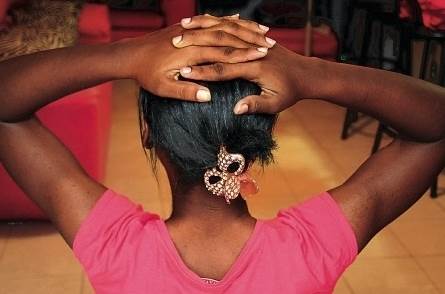 News
Horror of a 14-year-old girl in prison

Teen runs away for two days, spends year locked away

AS the 14-year-old girl sat inside a cramped cell at the New Horizon Adult Correctional Centre, she said to her herself: “If only I had listened to my grandmother. If my father was alive, he would not make me end up in this situation.”

The teenager is not shy to admit that running away for two days to sleep with an older man was the wrong thing to do.

[Hide Description] The teenage girl who was locked up for one year after running away from home for two days. (PHOTO: MICHAEL GORDON)
[Restore Description]
1/2

“It was peer pressure. Sometimes friends influence you to do things and I was influenced,” the teenager told the Jamaica Observer.

The child had left for school and never returned home after hanging out with friends in Spanish Town.

Neither she nor her grandmother could imagine that the act would land her in a maximum security adult penal facility for one year.

Her life was not an easy one, as her father was shot dead during a robbery in Honduras when she was a mere infant. She also lives in a depressed community where most of her female role models bleach their skins and talk openly about their sexual exploits. It is not unusual to see teenaged mothers with their babies in tow.

The child was reported missing by her grandmother and when she returned, the police called in a child protection officer from the Child Development Agency who interviewed the child. She was questioned without her grandmother being present and was carted off to the Fort Augusta Adult Remand Centre where she was detained without a court order.

Her grandmother was not informed of the move.

“The police told my grandmother to leave me at the station. They never told me where I was going. When I reached and saw the big gate, I said me just go way fi two day and me a go prison?” she said.

About two weeks later, the child appeared in the Family Court as an uncontrollable child. No contact was made with her grandmother to inform her of the court date, so the magistrate, after waiting an entire day to see if any of her relatives would show, remanded her for over a month.

She returned to court three more times before she was informed by the court that she would remain in prison until she reached age 18, as she was an uncontrollable child.

It meant that she would be incarcerated for four years as punishment for running away for two days.

The Child Care and Protection Act does not give a clear definition of when a child can be deemed uncontrollable. The decision is left solely to the judge’s discretion.

The label is often pasted on children without consulting their parents, guardians or the children themselves.

The act also requires the court to inform the child in as simple a language as possible of the reasons why the child is being presented before the court and that the child is entitled to assistance from the Children’s Advocate.

According to the teenager, she was never informed of her rights and never had any legal representation.

“I never had any lawyer, and even when my grandmother try say something in court the judge shut her up and tell her if she could control me I wouldn’t be there,” she said.

She gave a graphic description of life in an adult correctional facility.

“At Fort Augusta you have some big rats, them big like cat, flying roaches and roaches that crawl in your food. You have cats that sleep in the bed beside you. Even if you run them they come back in the bed. The food taste bad, you get fresh (barely sweetened) tea and the tea cold because them say we will burn up each other if them give we hot tea. It was very hard,” she said.

The minor girls are detained alongside, and mingle with adult women who have been convicted of serious crimes.

The girl said that on her first night in the prison another girl made sexual advances toward her.

“As me reach and start wonder what me get myself into, this girl tell me she going want me. So I tell her that me no love woman and she better don’t want me. When me lie down to sleep me feel this breathing in me neck and me shout out say whoever is behind a breathe in me neck, move. When I turned around, her face was close to mine,” she said.

That was the first of many incidents that saw her being exposed to sexual advances, sometimes from adult women.

The child was also the victim of physical and verbal abuse by correctional staff and other inmates.

“The warder and wardress treat we bad. Maybe two per cent of them would try to motivate us and tell us we soon go home. We get one sheet to put on the mattress and we have nothing to cover with. Then you have to deal with some giant-sized mosquito when night come,” she said.

The child said that all the minors were kept in one dormitory and were let out only twice a day to shower.

After six months in the St Catherine facility which houses adult female convicts, she was transferred to the New Horizon Adult Remand Centre, a facility built to accommodate male inmates whose cases were before the court.

There she would be introduced to a new set of horrors.

At Horizon, the child was locked into a 10 by six-foot cell for 12 straight days and was only let out to bathe in the mornings and evenings.

She again complained that the warders were very unkind and one even gave the inmates advice on how to commit suicide.

“He told us one way to commit suicide. One time two girls were fighting and him say whoever win get a bag a sweetie,” she said.

The child told the Sunday Observer that the warders would beat the inmates with batons and mop sticks.

After witnessing the suicide of a fellow inmate, who herself was beaten by male warders and whom she had befriended, the teenager fell into deep depression and was among three inmates who attempted suicide.

She ingested 21 amitriptyline, two Panadol, two Paracetamol, two Nyquil cough and cold tablets, two Histal, two cold and flu tablets, and a quantity of DPH Expectorant and Histatussin syrup mixed together in the space of 15 minutes.

She had been given two pills a day for depression, because she was having difficulty sleeping at nights.

“I remember being dragged by my head and someone slapped me and asked me what me take. I kinda answered and then went back to sleep. I wake up in hospital and them handcuff me to the bed. I did it because I was very stressed out and depressed. I couldn’t understand why a judge would want me to stay, ” she said.

Amazingly, the prison official did not inform the child’s grandmother that she was hospitalised and the woman only found out when she went to visit the child at the penal facility.

In addition, she was not allowed to visit the child in hospital until she managed

to get permission from the Department of Correctional Services.

After she had recuperated, the teenager was admitted to the psychiatric ward of the University Hospital of the West Indies, where after examination she was declared to have a bi-polar disorder.

She was then returned to the New Horizon Adult Remand Centre.

Weeks later she was returned to Fort Augusta where she was again exposed to sexual relations between inmates.

“I had to use a sheet as a screen to block out what them was doing to each other,”

The child was sinking into the abyss of depression daily as the reality sunk in that her life would be forever scarred by her horrific experience inside the adult prison.

Help, however, was to come her way, as her grandmother, frustrated and sickened by the court action, sought help

from the advocacy group Jamaicans for Justice (JFJ) which assisted her by providing a lawyer free of cost. The lawyer then made representation on her behalf and after a year she was released from prison.

Because she spent one year behind bars, she also missed out on a year of her high school education and although she is now 16 years old, the child is still in grade nine.

“You hardly get any lessons in Horizon and in Fort Augusta you get none at all. I have to repeat the year I missed out,” she said.

Still, the child was very concerned about the welfare of the other girls whom she left behind in prison.

“Me not on the inside anymore, but other girls inside there who don’t commit no crime. They bunch up girls who commit murder and stabbing with girls who them say uncontrollable. Them lump up everybody together,” she said.

been accused of, or convicted of murder.

(See related story Most juveniles have no legal support)