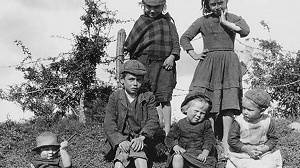 Police are investigating the discovery of 800 long-dead babies found in the septic tank at a home for unwed mothers in western Ireland. The Home (that is its actual name and, yes, it does sound freakishly ominous) housed thousands of pregnant and unwed — “fallen”— women between 1925 and 1961. The women left after they’d paid for their stay in indentured servitude. Their children, reports The Washington Post, may not have been so lucky.
A housing development and playground now stand on the land where The Home once stood. And while many would like to forget the horrible things that went on there, the discovery of the 800 infants (and possibly more, once excavation starts) is dredging up many memories for the locals.
“The bones are still there,” local historian Catherine Corless, who uncovered the origins of the mass grave in a batch of never-before-released documents, told The Washington Post in a phone interview. “The children who died in the Home, this was them.”
“When daughters became pregnant, they were ostracized completely,” Corless said. “Families would be afraid of neighbors finding out, because to get pregnant out of marriage was the worst thing on Earth. It was the worst crime a woman could commit, even though a lot of the time it had been because of a rape.”
There were many reasons children died at The Home. According to Corless, children died regularly of malnutrition and neglect. Others died “of measles, convulsions, TB, gastroenteritis and pneumonia.” The survival rates of children at The Home were awful, and even if a child did survive, their existence was a painful one. Corless told The Washington Post that her research into The Home is a way to make amends for some of the ways the “Home Babies” were treated by their teachers and their classmates.
“If you acted up in class, some nuns would threaten to seat you next to the Home Babies,” she said. She said she recalled one instance in which an older schoolgirl wrapped a tiny stone in a bright candy wrapper and gave it to a Home Baby as a gift.
“When the child opened it, she saw she’d been fooled,” Corless told Irish Central. “Of course, I copied her later and I tried to play the joke on another little Home girl. I thought it was funny at the time…. Years after, I asked myself what did I do to that poor little girl that never saw a sweet? That has stuck with me all my life. A part of me wants to make up to them.”
Still, even Corless doesn’t understand how the “Home Babies” who sometimes died at a rate of two per week were given such an awful end, stuffed into a septic tank and then left to be forgotten. Corless remembers that a group of teenagers stumbled upon the mass grave in 1995, and the pit they discovered, full to overflowing with skulls and limbs, gives them nightmares to this day.
Locals who want to forget the whole grisly business will have a much harder time now that police are involved.
“God knows who else is in the grave,” one anonymous source told the Daily Mail. “It’s been lying there for years, and no one knows the full extent of the total of bodies down there.”
Image via Twitter

118 Users Online
Back to top