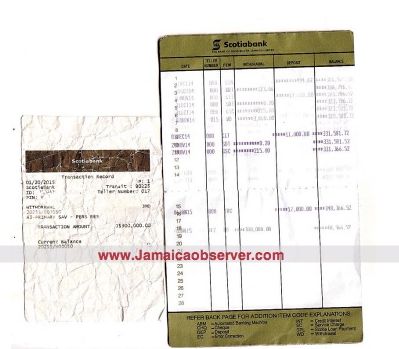 The bank book and receipt that show the withdrawal made on Tuesday. (PHOTO: RENAE DIXON)
The kindness of a 58-year-old woman meant nothing to a St Ann con artist last week, as she was fleeced of $300,000 in a bid to assist the con man, a senior citizen whom nobody expected to be involved in the business of ripping people off.
The woman, who did not want her identity revealed, works as a caregiver for an elderly woman.
The events unfolded in a bizarre fashion. It was last Tuesday that the victim decided to pay her bills in the parish capital of St Ann’s Bay when she saw the elderly man who appeared to be in distress.
“Him is about 87 or 88 years old. Mi can’t believe an old man like that a do dem things deh,” the woman lamented as she related her ordeal to the Jamaica Observer.
She said that as she continued her trek, she saw the elderly man crying along the road.
“Him say: ‘Hey Miss, just a word wid you’,” she stated.
According to the woman, the elderly man was asking for directions to a place.
“Him a ask mi about some real estate,” she said.
When she told the man that she did not know the place, he proceeded to tell her that he had been robbed by a woman who promised to help him buy a piece of land.
“Him seh dem rob him all the time and him have the whole heap a money,” she continued.
She said that while she was talking to the man he displayed large sums of money, some of which fell to the ground.
“Him have a pile a US dollars; mi nuh know if dem counterfeit,” she said, disclosing that she was unsuspecting of the man.
The victim said that the man asked her if she could help him deposit some of the money into her bank account, to which she asked him why he didn’t open an account for himself.
“He said he cannot read and write, and him nuh know how the bank system work,” she continued.
She then decided to help him.
Coincidentally, or so she thought, a car drove up and she sought the driver’s help.
After speaking with the driver, it was decided that he would take her home for her bank book to put the money in her account for the man.
“Is a short, dark man in a blue Probox car,” she recalled.
The woman was taken to her home where she retrieved her bank book. She said that the driver of the car, in the absence of the elderly man, suggested that she withdraw some money to show the elderly man so that he would not think she intended to take his money.
She then decided she would withdraw $300,000 from her account to show him.
“Him seh him want somewhere quiet to count the money so him carry mi through Fern Gully. When him a gwan mi a seh ‘driver, yuh can’t stop yah so.’ Him seh the man want to pray over the money… A pure God him a use to me, that’s why mi convince,” the distraught woman stated.
She was soon taken to a street in the Colegate area where the man proceeded to pray over the money under a tree.
She said that the man started doing some rituals which frightened her. However, she was still unsuspecting of anything.
“Him come and seh him put the money under a stone and it must stay there for some minutes,” she recalled.
It was then that the driver of the car suggested that she should watch where the man put her money.
“Him tell mi fi come out go watch the money because him nuh know what this man up to,” she said.
She decided to take his advice. It was then that both men drove away leaving her.
“Mi tek a stick and start search fi the money,” she said. However, there was no money.
The woman told the Sunday Observer that she had been saving the money since 2000, through partner plans and from her meagre earnings.
“Mi can’t believe a old man like this a do dem something,” she lamented.
According to the woman, she did not want the man’s money. She only wanted to assist.
“The man all a cry and mi seh mi a go protect him,” she stated, “Mi a beg God fi mek the police dem catch him.”
“The man nuh stop talk to me about God; how God good. That’s why mi believe him,” she added.
The woman said that she is also using the opportunity to warn others to be on the lookout because she has been told that she was not his first victim.
While all her money was taken and while she is upset that, she was tricked, the woman is also grateful that she was not harmed in the process.
According to the victim, she has since reported the matter to the Ocho Rios Police.