A WHA DO LA LEWIS MAN 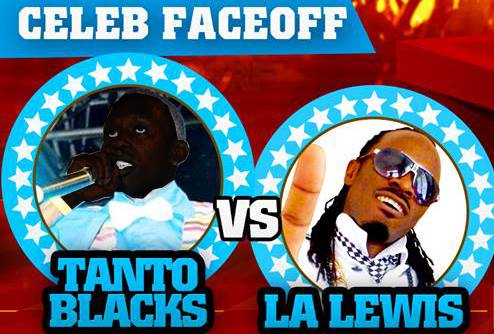 Turning his anger towards Mad Cobra and Bounty Killer, yesterday, in a telephone call to The STAR, the self-proclaimed Seven-Star General all but declared war.
The first of Lewis’ grouses has come because of a Bounty Killer dub unleashed by Tanto Blacks during the clash.
According to Lewis, he considers Bounty a friend, and a friend should not have given, “a clown, dub fi shoot mi. A clown him clown mi out.”
violation
The ‘violation’ does not mean an immediate war though as the ‘Illuminati’ (again self- proclaimed) is giving Bounty 88 hours to make a public apology.
“Bounty knows what 88 hours mean, double infinity. Tell Bounty don’t ramp wid mi!”
According to LA Lewis, he has long told Bounty Killer he is the star of the night, “and me a di star a di day.”
With that in mind, LA Lewis says Killer must be careful he (LA Lewis) doesn’t “start wear piece a black an’ start run di day an’ di night”.
“Him wave him rights fi call LA Lewis him friend,” Lewis declared.
While L.A. Lewis has extended a time frame for quashing the possibility of a beef with Bounty, Mad Cobra is getting no such favours.
“Mad Cobra fi know seh a Gaza run Portmore and him run a quarter acre. Him run a quarter acre and call it Brixton,” said Lewis.
His anger at Mad Cobra has come because, according to Lewis, the Flex singer had his fans boo him to ensure he lost the clash.
“Before mi start dem a boo,” said Lewis.
diss song
“Cobra feel like seh him could a bring een im crew fi boo mi an’ mi wouldn’t know?” Lewis asked.
“Him fi memba seh, a me seh Gaza,” said Lewis, going on to explain that Mad Cobra was angry that LA Lewis had done songs dissing him. According to Lewis, Cobra ran away from the impending clash, and, instead, chose underhanded methods of seeking revenge.
While angered at the two artistes because of the clash, Lewis says he has nothing against Tanto Blacks, who unceremoniously dispatched his efforts last Thursday.
“Mi big up Tanto Blacks on him victory. Is a trying yute ‘an’ mi nuh have nutt’n ‘gainst him.”
Turning his anger back to Bounty, Lewis pointed out that he was more than fair in giving the 88-hour ultimatum.
“If war start, nubaddy cyaa seh LA Lewis cause trouble. Mi gi him whole heap a time fi apologise.”

0 thoughts on “A WHA DO LA LEWIS MAN”