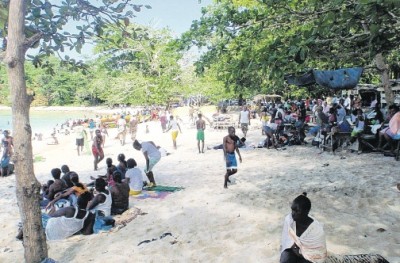 THE Urban Development Corporation (UDC) has been ordered by the court to grant public access to Winnifred Beach in Portland, ending a five-year legal battle between the residents and the entity.
The ruling, which was handed down in the Port Antonio Resident Magistrate’s Court in the parish last month by Resident Magistrate Marjorie Moyston, said UDC has 90 days to create on a new title an easement for the right of the public to access the beach for bathing and recreation purposes.
Four members of the Free Winnifred Beach Benevolent Society took the matter to court five years ago, seeking a declaration of the public’s absolute and indefeasible right to access the beach.
This, after news broke that the UDC intended to develop the lands on which the beach is located, under Fairy Hill Phase 2. The features of Fairy Hill Phase 2, according to the 2006 environmental impact assessment (EIA) report on the proposed development, included not only the construction of beach cottages and residential lots, but also a Fairy Hill Beach Park.
“The beach park would feature, at minimum, the following amenities: a ticket office, guard post, business offices and family-oriented recreational facilities, as well as sanitary conveniences,” noted the EIA report done by consultants Technological and Environmental Management Network.
“The main feature of this development will be the 29 residential lots ranging in size from 821 to 1,505 metres-square. Beach cottages will also be constructed to provide temporary dwelling opportunities for beach patrons and other visitors to Portland who are desirous of extending their length of stay,” the EIA report added.
However, residents objected to the development on the grounds that it would interfere with the public’s free access to the beach, which forms a part of the development.
It is against this background that the members of the society, which was formally established later, filed a suit.
Following last month’s ruling, the Winnifred Benevolent Society expressed delight at the positive end to the five-year battle.
“Winnifred Benevolent Society wishes to celebrate the right for all to access the beach, the need to recognise community spaces where everybody can gather and spend a special day,” said the society’s co-ordinator, Maria Carla Gullotta.
She noted that while the association is happy with the decision, the fight is not yet over as the issue now on the table concerns who will control and maintain the facility in the proper way.
The society, she said, is ready to take control of the beach and will therefore be applying to lease the facility.
“It is indeed years since Winnifred is able to accommodate huge crowds, especially on holidays, thanks to the restless work of a bunch of people working at the beach; keeping it clean, trying to fix the bathrooms, trying to repair the road, making sure that on busy days we have lifeguards in place, clearing plastic bottles and teaching everyone to be gentle to all visitors,” she explained.
Gullotta said in the last three years they have been fighting to protect the turtles coming to the beach to make their nests. Some adults and teenagers are said to have created a task force to monitor them.
“We have the energy, the power and the expertise on the ground to control Winnifred Beach,” she insisted.
The society thanked its many supporters, including Geejam, for becoming part of Winnifred Benevolent Society to support its request to UDC to secure a lease.