TRINIA MOST WANTED CALLS FOR BIBLE WITH OLD AND NEW TESTAMENT 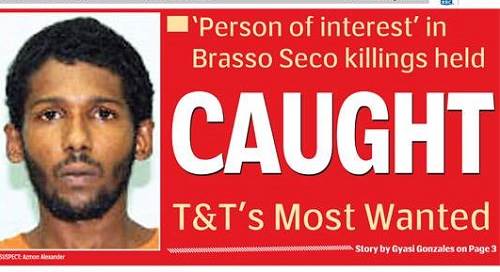 To pass the time while waiting for investigators to question him on his alleged role in the Brasso Seco kidnapping and killings, Azmon Alexander, 29, has asked to be provided with a Bible.
While in his cell at the La Horquetta Police Station yesterday, sources said Alexander asked the officers to provide him with a book of some sort, preferably a version of the Bible which includes the Old Testament. He reportedly made this request with the hope that it would be passed on to his family, sources said, so that he would be able to focus his thoughts while he was detained.
Sources said the message was passed on to his relatives as well as Alexander’s attorney Fareed Ali, and in the interim, a New Testament Bible was expected to be handed to him yesterday, while his family secured the version that he wanted.
Sources also noted that Alexander had asked that officers allow his relatives to bring him food yesterday, this time asking for some “doubles with pepper” to be brought to the cell. This request, sources said, was initially denied by officers at the station, leading to several outbursts in the morning by the 29-year-old man as he quarrelled with the lawmen. However, the decision was expected to be revisited during the day. It was unclear up to last night, however, if this had been done.
The 29-year-old has been under constant surveillance since his capture on Sunday morning and has been confined to his own prison cell at the station.
A police officer is stationed right outside the cell at all times, and officers are said to be on “high alert” for any possibilities.
Sources also noted that Alexander was “very vocal” at times to officers at the station, complaining about the conditions he was being kept in and being forced to sleep on the ground.
The 29-year-old was said to have received some injuries about his body, which police have denied were derived from beatings by them.
These injuries reportedly included cuts to his right leg and left shin; a swollen thumb and swollen wrist on his left hand; and deep swellings around his face and eyes.
When contacted for a comment yesterday, Alexander’s attorney confirmed that his client had injuries about his body, however, he noted that he had yet to be provided with Alexander’s medical report by the police and as a result, he was unprepared to give full details at that time.
Alexander’s mother Mary, 61, when contacted yesterday, said she was unsure if her relatives had delivered the food that her son had requested.
“I really can’t say at this moment. My other children have jobs and lives of their own, and since Monday morning I am suffering with chest pains, so I am unable to do it myself. What I can tell you for a fact is that I didn’t go anywhere or buy anything. I don’t know what the others did. They were supposed to drop off clothes and stuff for him this morning too, but as I said I don’t know if they did it. But I know when they went to the station yesterday, the police said no one would be able to see Azmon at all. They told them that he was in an OK condition and that they would take care of him and that was it,” Mary Alexander said.
Azmon not yet questioned
Sources noted that, up to late yesterday, police investigators had yet to question Alexander on any involvement in disappearance of Irma Rampersad, 49, her daughters Jennelle, 19 and Felicia Gonzales, 17, and Jennelle’s one-year-old daughter, Shania Amoroso.
Along with Alexander, a 17-year-old suspect from Goat Hill, Arima, is currently at the Arima Police Station assisting police with their enquiries.