A WONDER A WHO WRITE DI LETTER DOE 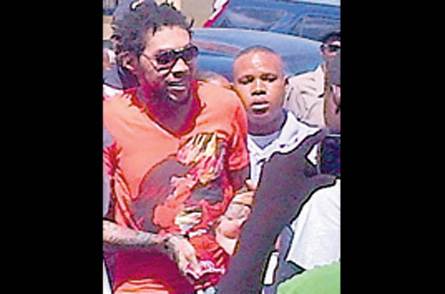 Defence attorney Michael Lorne yesterday questioned the prosecution’s main witness in the Vybz Kartel murder trial about a letter which he allegedly wrote in November 2011 and had delivered to Public Defender Earl Witter.

On being asked if he at anytime wrote a letter to the public defender stating, “why I don’t want to come to court is because I see Clive after that”, the witness said he did not write such a letter.

The witness was further asked if he wrote in the letter that “the purpose of this letter is to inform you that the statement taken by the police by me was not willing”.

The witness responded: “I did not write a letter, sir.”

He said nobody from the Office of the Director of Public Prosecutions had ever shown him such a letter.

Lorne suggested to the witness that he had given his aunt the letter to take to the public defender in November 2011, but the witness said the first time he was hearing about the letter was when Kartel’s lawyer, Tom Tavares-Finson, mentioned it in court yesterday.

The Crown, represented by prosecutors Jeremy Taylor and Leighton Morris, is alleging that on August 16, 2011, Kartel and his four co-accused murdered 27-year-old Williams of Waterford, St Catherine, at Kartel’s house at 7 Swallowfield Avenue, Havendale.

It is being alleged that Williams was murdered over two missing guns.

The witness had testified this week in the Home Circuit Court that Campbell and Kartel had said he should go to Guyana with them on August 18, 2011, because they did not want anyone to question him.

Questioned further by Lorne, who is representing Campbell, the witness said on August 17, 2011, it was Campbell who telephoned him and told him that he was taking him to Guyana.

When he was shown his statement to the police, he admitted it was when he walked down to Campbell’s house that Campbell said he was going to Guyana. He denied the suggestion that he was the one who asked Campbell if he could go to Guyana. It was suggested to the witness that ‘Lizard’ had only gone to the guest house in Havendale but the witness said he, Campbell and Lizard went inside Kartel’s house on August 16, 2011.

Lorne pointed out that a page was missing from the witness’ typed statement and Justice Lennox Campbell has asked the prosecutors to provide the missing page today to the defence lawyers and make attempts to find the original statement.

Taylor explained that the prosecutor who had conduct of the case, had since died and they had searched for the statement but could not find it.

0 thoughts on “A WONDER A WHO WRITE DI LETTER DOE”