ABOUT THE STING LAUNCH 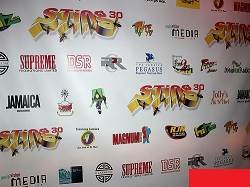 President and C.E.O of Downsound Records who has now partnered with Supreme Promotions for Reggae’s career launcher, Sting, Joe Bagdanovich, said this morning that the Sting launch last night was a success.
Sting celebrates thirty years as Jamaica’s biggest one night Reggae show. This year and in a bid to make the anniversary special Bagdanovich along with Supreme promotions pulled out all the stops,no expenses were spared and Isiah Laing who had not traveled to the U.S in years, made the trip. Sting is the only show in Jamaica’s history that has been credited for launching the careers of more than 80% of Reggae and Dancehall’s greatest. Sting’s crowd is brutal, their expectations are high, they cheer loud and boo even louder. Surviving Sting is said to show an artiste’s talent and endurance.
Reggae artiste’s worldwide flock to be on Sting’s lineup. Many without pay because the exposure is worthwhile. The shows production this year includes Mavado, American rapper 2Chainz, BeenieMan, ElephantMan, NinjaMan, Sizzla Lady Saw and the long awaited Don Dada Supercat who has not performed at Sting in many years. While speaking to JMG , this morning, Bagdanovich said that many patrons who did not attend Sting for many years will be returning this year because of the lineup.
The press release party was said to have ”exceeded expectations” Mr. Bagdanovich said , ”The location (The Griffin Hotel Soho) shows that we are not only reaching out to our regular audience but, Sting is a multi-age, multi-national international Reggae show and we want people to see that. Soho, New York was a great location for that”.
Young professional dancers danced on table tops, media personnel from all over the U.S turned out in high numbers for the first Jamaican based concert to ever have international release party. The ambiance was relaxed yet professional, driving in what Sting aims to do this year. Bagdanovich says the launch is ode to the change in the process for Sting’s 30th year. The show will be carried live by satellite from Jam World Entertainment Center and will be available at over 300 locations worldwide. There will be ”clash after clash” , ”veteran dj” and a string of new artistes . Special provisions were made for the 30th celebration which involved a drastic reduction in the price for watching the concert online . Person’s who will be watching the show online are encouraged to buy their tickets early because the cost will be far less than on the day of the show.(UNNO DOE FIGET). Not only that , but it will be much easier to get on the stream. There are also chances to win free tickets to the event and watch it online. Sting’s official sites http://bringthesting.com and http://stingjamaica.com.jm please log on for details.

9 thoughts on “ABOUT THE STING LAUNCH”