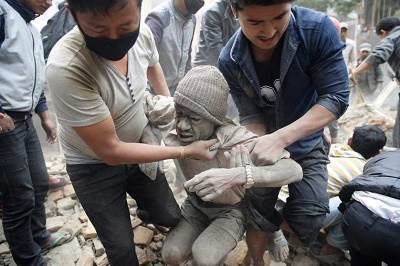 A new powerful earthquake convulsed the traumatized nation of Nepal on Tuesday, killing at least 32 people.

The shock waves rippled out from a remote area of eastern Nepal, near the border with China, leveling buildings already damaged by the devastating quake that killed thousands of people two and a half weeks ago.

The magnitude 7.3 earthquake Tuesday struck at a depth of about 15 kilometers (9 miles), the U.S. Geological Survey said, slightly revising its earlier estimates. A series of significant aftershocks, the strongest measuring magnitude 6.3, followed the initial larger quake.

The earthquake shook a country still picking up the pieces from the magnitude 7.8 quake that hit central Nepal on April 25, killing more than 8,000 people.

The epicenter of the new earthquake was about 75 kilometers east of Kathmandu, the Nepali capital where many buildings were destroyed in the earlier quake.

The four deaths were reported in the town of Chautara, about 35 kilometers east of Kathmandu, said Paul Dillon, a spokesman for the International Organization for Migration.

The bustling capital was once again plunged into panic as residents rushed into the streets.

“People are very scared and they don’t know what is going on,” said CNN iReporter Prashup Rajbhandari in Kathmandu. He said he thought the quake had cracked his house.

Another resident of the capital, Mingma Sherpa, said he and his friends jumped out of his car when they felt the earth begin to tremble. They ran with crowds of other people desperately seeking open space in a congested area of Kathmandu where there are few.

Manesh Shrestha, a CNN producer, was with a group of people helping to clear debris in Sankhu, a town east of Kathmandu, when the new quake struck.

He said it caused three or four damaged houses nearby to start to collapse.

Sabin Shrestha, a social activist in a village on the outskirts of Kathmandu, said dozens of houses around him that had suffered cracks in the last earthquake came down.

In Sindupalchowk, a district northeast of the capital that was heavily hit by the previous quake, journalist Anil Thapa reported multiple landslides and fallen houses.

People in Lukla, a town that serves as a gateway to the Everest region, rushed to the airport so they could be in an open area as the earth shook again. Most of Lukla’s buildings are perched precariously on hilly ground.

The airport is reported to be in a risky setting because of the short runway that’s surrounded by mountains. But on Tuesday, Chungba Sherpa was glad to be there.

“People are here because there is open space,” he said by telephone. “They are very scared.”

Many houses are damaged, he said, and the hospital in Lukla was tending to the injured, including four high school students from the village of Chaurikharka, which was already reeling from devastation in the April 25 disaster. The students were carried on stretchers on the half-hour walk uphill to Lukla. The only way to access Chaurikharka and other Sherpa villages is by foot.

Chungba Sherpa owns Khumbu Resort, a hotel for trekkers in Lukla. Normally at this time of year, every room is full. The hotel emptied after the April 25 quake. He said he feared the few remaining tourists would flee after the new quake.

The extent of the damage near the quake’s epicenter wasn’t immediately clear Tuesday.

The tremors were felt across the region, including in the Indian capital of New Delhi.

The initial quake was followed by a series of aftershocks, the strongest measuring magnitude 6.3, the USGS said.

Jack Board, a reporter at Channel NewsAsia, filmed chaotic scenes at Kathmandu Airport of hundreds of people running from the building as the ground shook.