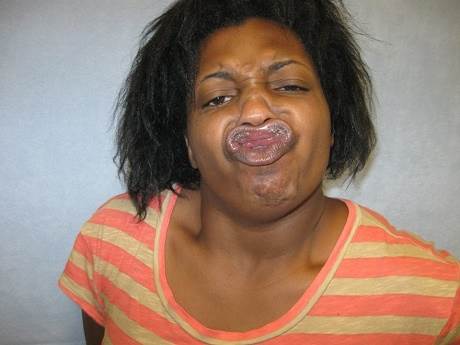 On Saturday, 07/12/14, at approx. 1206 hrs., the management of the Quality Inn, 28600 Euclid, called the police department requesting assistance for guests who refused to leave. Responding officers found that a male and female had rented a room the previous evening and were to have checked out by 1100 and now would not leave. Officers knocked on room 253 and the door was answered by a male and female. The officer explained that they needed to leave or rent the room for another day and the female became loud and uncooperative. The officer identified the male, 24 year old Brian Baker of Cleveland, and attempted to identify the female; however, as the couple was being escorted from the building it was discovered that she had provided fictitious information. Once outside, the female continued to become loud and uncooperative and refused to identify herself. After a brief struggle the female was arrested and transported to the WPD. The female was identified as, Angela Green, a 34 year old Cleveland resident. Green was charged with obstructing official business and eventually released on $354 cash bond.
LikeLike · · Sh

0 thoughts on “ANOTHER VIRAL MUGSHOT”